Of the three action figures, I like Commander Adama best. Apollo and Starbuck - I don't care for their faces and I haven't "warmed to" so I'm going to keep their nifty suede jackets and their tan pants and see if I can sell the guys nude. I'm having difficulty removing their boots so I need to contact someone at one of the action figure boards - probably Men With Dolls - about HOW to remove the boots, if I will need to cut/destroy the boots to remove them.

Jazz Baby Cabaret Dancer Barbie has the pivotal, posable body. I like her smoky, sultry face and her lean, toned build. Interestingly, she makes Teresa look almost plump. I like variety in the sizes and shapes of my figures - except for oversized heads or disproportionate limbs - so I don't mind. She'll be able to share clothes with the Barbie Fashion Model series. 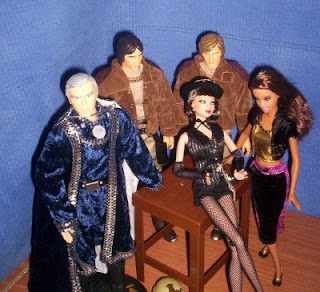 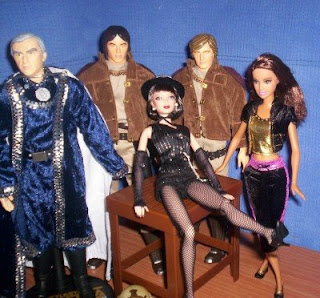 Posted by D7ana at 6:11 PM No comments: Links to this post