Poser Kens and Knowing When to STOP Adjustments

This is Ken's 50th anniversary month so various Kens will appear here at PhillyCollector. In this photo, we have some of the poser Kens. There are others, of course, like Speed Racer, etc. but these are the guys I have now. In the first photo, I took the photo and only cropped the original. It looks fairly clear to me. 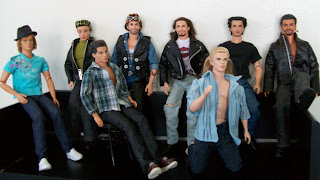 Then I thought, but doesn't the darkness of their pants run all together? Wouldn't it be nice to see the difference between their pants and the background? And that's when the trouble began. I started fiddling with the contrast in my Kodak software. Slam! That's when things went wrong ... That's when I got this bleary, dreary, washed out photo: 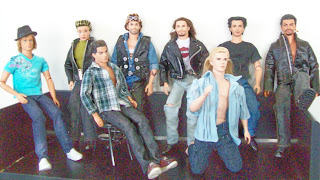 Moral of this post? In addition to allowing for plenty of light for your photographs, it's better to reduce or to avoid using the software adjustments. What looks "good" to weary eyes on the computer screen does not necessarily translate to a good photo online.

Aside: for some reason all my Black Kens are non-posers. So I could not include them in this photo. They will ALL appear in my Ken Birthday post.
Posted by D7ana at 2:19 PM 5 comments: