A funny thing happened after I shot some photos of some dolls and action figures. I wasn't sure that I would even post them today. Just fooling around with some figures in a gym setting. Minus some of my gym stuff that I tucked away. Argh. Well, I had taken the photos I wanted so I returned to my computer.

Kunkle, kunkle. I looked up and turned around to where that sound came from. The sound of plastic hitting the carpet. Twisted my head to find my two boxers no longer on the table where I had posed them, but under the table in an action pose better than mine. I laughed to see them there, posed more realistic if more violent than I had intended. Like they wanted to show me what real action poses looked like. Sigh. Everybody's a critic.

Then again, it's getting late. I'm just tired. But here are the photos for you to decide ;-D 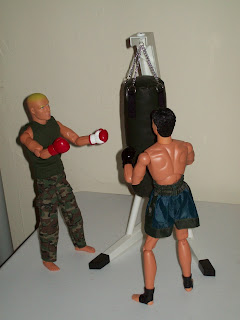 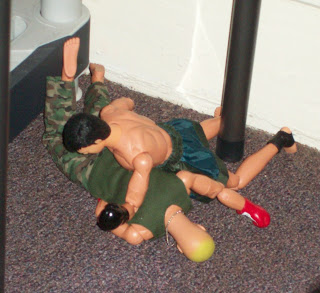 Course being me, I had to show them "making nice." 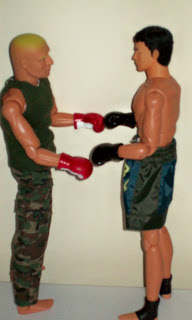