Doll blogger Muff recently shared a post about a new Barbie Career Set, Chef and Waiter. At a Toys R Us store last week, I saw another Barbie Career Set. This one had a petite-bodied, Millie-faced Barbie for astronaut and a tall-bodied, Asha-faced Barbie for space scientist. I like the height difference. I do wish the bodies were articulated - seems that they are not. I took a very brief video showing the set and a photo showing the back of the box. 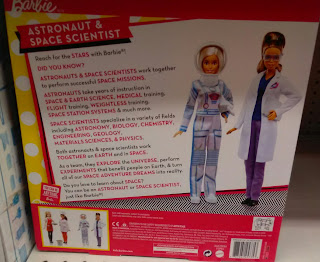 I wonder if Mattel will be producing double doll career sets. Seems like a fun idea to me. Has anyone seen this set? Are there other career sets - aside from the Toys R Us exclusive Ken and Barbie one seen a few years back?
Posted by D7ana at 9:31 PM 7 comments: Links to this post

Six Mattel Fashionistas reached me on my birthday this year. Can you guess which ones by the soles of their feet? 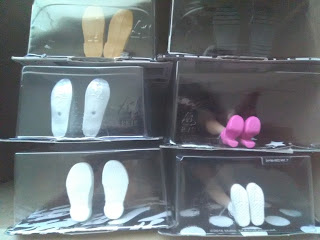 No? Okay, I'll show them in pairs. The first two are Ken Fashionista #8 Camo Comeback and Barbie Fashionista #60 Patchwork Denim. He is so gorgeous. I love his Roman nose. I don't think there has been a Ken with such a nose before him. Maybe Romeo Ken? Maybe.

Penny became related to Bill on arrival. I thought that they had a similar, Eurasian look. Siblings. I like her hair color. Sassy orange. She looks fun and friendly. She's wearing her "Raggedy Ann" dress. I look forward to finding something else for her to wear. 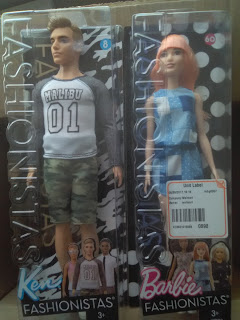 Next pair are Ken Fashionista #9 Plaid on Point and Ken Fashionista #12 Chill in Check. Number 9 is another friendly face. I see him as a Felix. Easy-going and lucky. He's standing next to #12 to show the slight height and width differences between the new Slim build and the new Broad builds.

Number 12 reminded me of an Agatha Raisin character, Bill Wong. Only my Bill Wong is not going to be a policeman, AND he is not an only child. 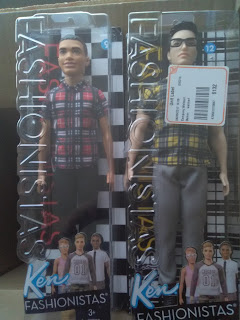 Now my last pair for today are Ken Fashionista #10 Classic Cool and the blond, curly-haired, fair-skinned, Desiree-faced Barbie Fashionista from 2014. Number 10 is Curtis. I like his cornrows - although I agree with some collectors that some scalp needs to show between those rows - and his soft, full mouth.

Surprised about the 2014 Fashionista? Yay, I finally got her. I thought I could "settle" with the red-haired, curvy Pop Star Barbie. No. I still wanted this one and her necklace. 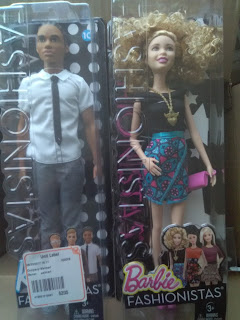 So those are the Barbie/Ken Fashionistas I chose to receive on my birthday.  Do you have or want any of these dolls?

Mattel 2017 Wonder Woman - Diana Prince in the blue gown. Yes, she can wear a sword in a hidden sheath in that gown. Where? Well, you can "hide" the sword in the back of her gown. Not the most practical location to put a dangerous weapon, I agree. But cool all the same. Now I would have preferred the bow-wielding doll for face screening and hairstyle, but when I saw that $5.00 sticker beneath the spot for the blue-gowned doll, I nabbed TWO. One to keep as she is; the other, to give another doll articulation. I mean, F-I-V-E dollars for an articulated doll with a SWORD.

(I know nothing about swords, but I do like them as a doll or action figure accessory. Sigh. So romantic. Dramatic. I'll consider how to work a sword into a story later.)

Where did I find this bargain? At a brick-and-mortar Walmart store. Online, she costs $14.97. So it saves to go to the physical store sometimes. 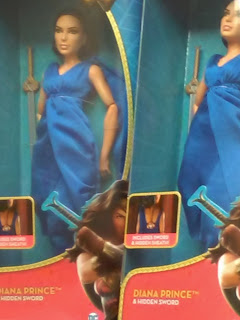 Toy Fair comes once a year. Where do I start? Mattel and Barbie.

Yes, I am a Barbie-centric doll/action figure enthusiast. This year, that means the Fashionistas! Idle Hands has a YouTube video on the new Fashionistas. Another site showing some new Fashionistas has me ooohhhing and aaahhhing. Check the black doll with that afro! Want List. Or the gal with the light blue hair. Want List again. The two dolls with orange hair? Four I gotta have dolls. If you have a Yahoo or a Flickr account, check the photos here.

What about the Barbie Careers dolls? Nerd News Today names some career options we have seen in 2016 along with a new one. Think, Bob the hum hum.

Moving from career women to a fictional "super" woman, let's check Entertainment Weekly's photos of Mattel playline Wonder Woman action dolls. Yes, she seems to have the same gorgeous face as the Batman v Superman: Collector's Edition Wonder Woman. Hooray for those of us who now won't have to pay the collector or the markup prices for her. I think the play line doll needs a longer neck. I will re-body her.

What about Mattel's famous women in play scale ... and yes, I refuse to describe them as "Sheroes" because that term irks me. Pause to set my teeth and face straight. If you've seen the MyFroggyStuff video, you'll know that the Mattel Gabby Douglas doll WILL be available this April. Are you an Ashley Graham fan? Guess who is getting a curvy Barbie in her image? Additional link available here. NerdNews reports that the Ashley Graham doll will be available in April. Natalia Vodianova joins the list of real heroes captured in play scale by Mattel. You can read about the super model, mother, and philanthropist online.

Okay, it is not fair to title a post "Toy Fair 2017" and NOT include links to action figures or other dolls. Wondering what's new in 1:6 scale outside the Barbie Universe? Asmzine (Altered States Magazine) reports on Big Chief Studios and other toy manufacturers. Michael Crawford lists his Top Ten Toy Fair 2017 picks. Toyark shares photos of some Hot Toys figures to come. And there is a special new set coming that I am saving for its own post.


Those are some of the dolls I look forward to seeing. Do any of these excite you or are you looking for some others?
Posted by D7ana at 10:52 PM 7 comments: Links to this post

First New Doll of the Year

I found him in the Rittenhouse Target. It is like a mini Target. They have a small doll section roughly one-quarter of their regular doll aisles. The doll offerings included Barbie Fashionistas and Career dolls and a few Disney selections from Frozen and Moana. Alas, the online sales did not appear in this store - but I think prices at any stores in Center City get marked up because of the location. Shrug. Still, this store could be good as a "ship-to-store" option.

Had I intended this Ken to be my first doll of the year? No. He happened to be in Target when I was. He seemed hidden behind the other Kens. I didn't see Hip Hop Hoodie or any of the other 2017 dolls I'd considered who might have outranked him. However, he was on my Want List. Here's why
New guy [face] in town. Mattel produces fewer male dolls so it's fun to nab the ones that they do make. As much as I like some face sculpts, I like variety, too. Having a new male face is like having a new character.

Cutie status. I like his nose. It looks "Roman." I like the slight jut of his chin. Someone said he reminded her of Mario Lopez from Extra. I could see a slight resemblance, but this Ken does not have as strong an ethnic look. I don't have any other dolls named "Mario" though so that's his name in my doll world.

Decent male outfit. Confession: I do not like pink for my guys. Usually. So when I saw this outfit has a black and gray tee and distressed burgundy "jeans" with tan construction boots, I was hopeful. Seeing that the shirt and the pants were separate cinched the sale. The tee has a nice jersey feel with a velcro closure in the back. While the pants are as skinny as they can be, they are made from a cotton cloth that works for play scale jeans. They also have a velcro closure in the back. The plastic molded boots have a slit in the back to allow them to be easily put on or pulled off. Sigh. The boots look best from the front or the side.

I asked my brother to take the photo here with his cell phone. Jaye, I understand what you mean about camera phones. Some phones' cameras anyway. Fuzzy photos. This was the best photo; the ones from the cell phone I have were fuzzier. I wanted to have at least one photo for this post.

So welcome, Mario, to East Philadelphia.

The Janus Post: Recent Past and Near Future Doings

Let's start with a health update. Good news: my lungs are clear (no cancer there). The two lesions on my liver have shrunk to 4mm each. I am to have another CT scan in March to see if I will need additional chemotherapy or if I can - oh please - get scheduled to have my colon returned.

State of my doll collection: some dolls and action figures are still in storage. I've created an Excel spreadsheet to track those I have and those I need to recover. So glad to reconnect with my play scale and other plastic people.

Collecting 2016 and beyond. Yes, I bought some doll in 2016. You bet I got some of those new Fashionistas, but I also got two of The Wanted guys and a few others. I'll share a post about them in February. Any guesses as to which Fashionista body shape I like best? Anyone want to share which if any of the Fashionista shapes you like? Any with favorites? Any want to share their favorite body type(s) in order of preference?

Camera status. Still need to get a new digital camera. I have received helpful suggestions on specific brands and models from doll buddies Debbie B. Garrett and Ms. Harley D. I MUST get a new camera. Must.

Online doll communities. I'm commenting and viewing posts and photos. Thanks to everyone who visited this blog during my absence and who return.