Siva Kaneswaran, singer from The Wanted


So that is two additional dolls. Can you think of others that I have missed? Thanking you in advance - big smile, Dana
Posted by D7ana at 9:08 PM 13 comments: Links to this post

Dhoom 3 is a new Bollywood action movie. You know by now: action movie = promotional items = dolls and/or action figures based on the action movie. Guess who is looking for a piece of this Bollywood action movie? Yes, Mattel. Mattel has produced a Barbie and a Ken as two characters from Dhoom 3: Sahir/Samar as played by Aamir Khan and Aaliya as played by Katrina Kaif. Ho hum? No way! What excites me about these dolls is that they seem to have unique face sculpts. Mattel had issued a Katrina Kaif Barbie before, but that doll used a standard Barbie-mold. The Drew face mold. That was a bit ho hum. This set of dolls will be Mattel's first South Asian specific face sculpts. And even more cool, the Aaliya Barbie seems to be articulated.

Checking online vendors, I see that Ram Chander and Sons ship all over the world. Their doll cost is 1,999 Rs - $32.06* - for either Sahir Ken or Aaliya Barbie. That price seems about what we would pay for movie-based dolls here. What about shipping and handling? Let's break that down:

Buying one of the Dhoom dolls:


Buying both of the Dhoom dolls:

Those prices are for dolls mint in their original boxes going to the U.S.A. If you are buying multiple dolls AND if you have no interest in retaining the Mattel box, the RCS team will debox the dolls, which would lower the postage cost. If you want your Dhoom doll or dolls sent to another country, please e-mail them at rcstoys@gmail.com . You will receive information for shipping to your country.

Payment is via online bank transfer or Paypal. (Note: Paypal charges are extra. Additional note: the base cost does not include customs fees and the exact figure which might vary depending on currency conversion for the day.*)

Want additional information about RCS Toys? They have a Facebook page and a blog. Here is more contact information:

These are in real life photos of the Dhoom Barbie. They are taken by Chicovintage, a PhillyCollector ally. Thanks again, Chicovintage, for sharing these lovely photos!

Nice to see vintage or different playscale furnishings, but isn't it nicer when a model is involved? I think so. So when neither Pedigree (aka Marx in U.S.A.) Sindy nor Vivid Imaginations Sindy or Vivid Imaginations Mel were available, I brought in Lanard I-Girl Paris. She has a similar build, and she's articulated.


Thanks, Paris, for your help. Does anyone have any questions about this Sindy appliance?

Paris is a Lanard fashion doll. She is one of the I-Girls (Asia, Aspen, Rio, Sahara, and Sydney) that I bought them from a doll/toy boutique, Small Blue Planet, many years ago. There doesn't seem to have been a large distribution of the I-Girls, but I found a new article on this line today. My research senses are tingling. I'll post more about Paris and the other I-Girls in the future.
Posted by D7ana at 11:11 PM 21 comments: Links to this post

Pardon this interruption into our usual playscale theme, but I wanted to share this link for any and all interested. Someone had asked if I knew anything about an Integrity Toys' playline of toddler dolls. At the time, I had not known anything about them. However, today, I found photos of them. The author mentions that the dolls are 12 inches. So they are NOT playscale.

Which Jamal Head Sculpts Are Staying?


Does that sound odd? It isn't. Collecting is active: there is always something bright and new that I want. And something that I have had that no longer attracts as it once did. Or maybe it never did. Maybe it was on sale. Maybe I thought I should like it. Then I wonder why I bought the figure. Or I find something else more to my current taste.


Space is another consideration. I cannot collect and collect as I did when I was younger and had a whole house that I could fill. Then there are new figures calling my name. Or maybe that is just my excuse to let go certain figures that I am now convinced would make someone else much happier. How can I be so selfish as to keep a figure someone else really needs and wants?


So, here I am going through my collection and culling some dolls and action figures to sell or trade. Today I was looking at my Mattel Jamal-faced dolls. There are seven of these dolls: 5 deboxed and 2 NRFB. Can you guess which ones I intend to keep and which ones I will be listing to sell or trade? I am sharing close up photos of their faces. 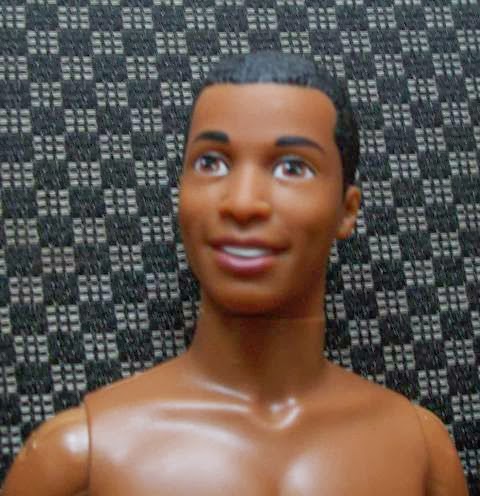 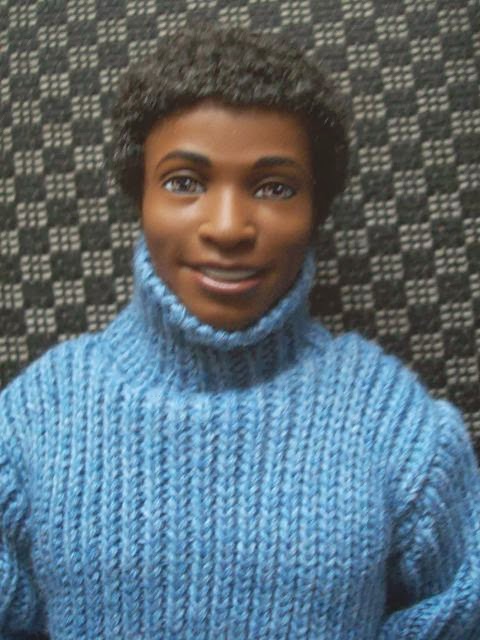 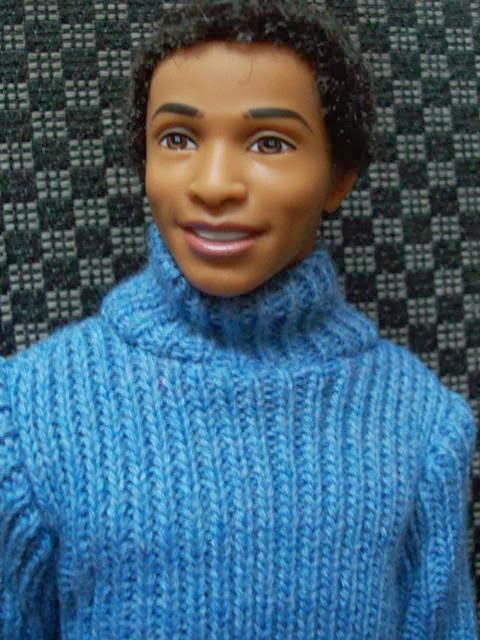 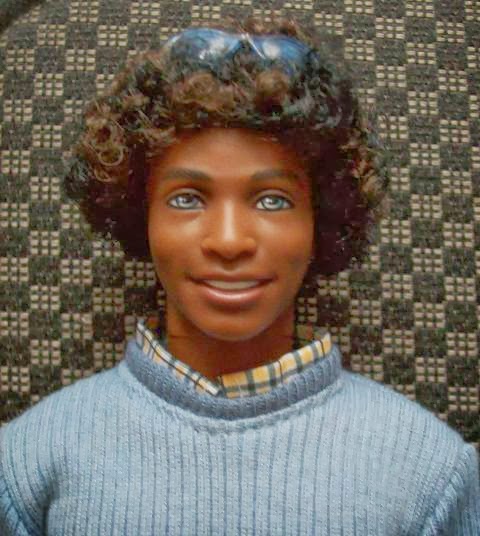 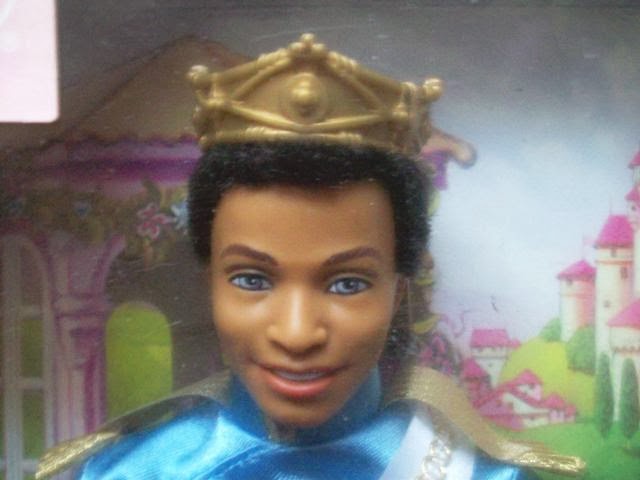 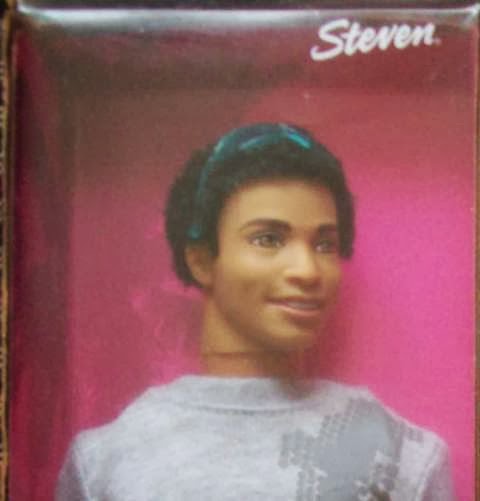 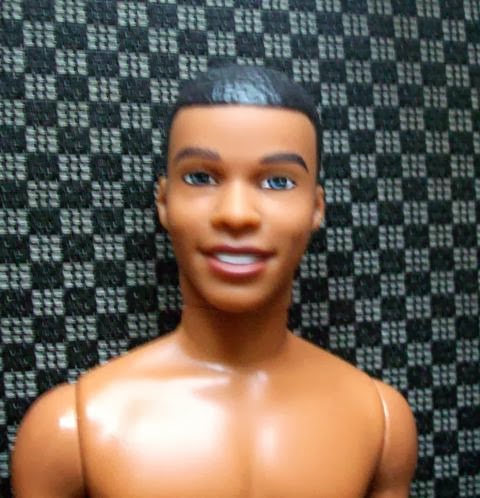 September 6, 2013, Sindy celebrated her 50th anniversary. I am contributing to that celebration a few months later.

The site Our Sindy Museum notified collectors worldwide about this occasion. While Sindy was never as omnipresent for me as Barbie was - I avidly sought Sindy furniture in the late 1970s. Avidly. For my Baggie Francie and my Kate Jackson dolls. This was the Marx Sindy furniture - remember I am American - and it was far better than the modular pink and blue stuff Mattel was producing for Barbie. Two points: first, the pieces resembled actually resembled furniture and second, the colors were realistic. Result: I HAD to have them.

I still have the Sindy Bathtub stock #1240. It is a rectangular aqua blue bathtub roughly 12.75 inches long by 4.5 inches wide. The top has turned a slightly greenish-blue color, but you can see the original aqua color on the outside. No, Old Joe and all my military guys did not wash their dirtiest fatigues in the tub. I plea not guilty: age has given the tub that unfortunate patina. But the chain remains unrusted and still attached to the plastic plug. The original accessories were a white soap tray (shown), a yellow bath mitt, a bath towel, and a face cloth. The Sindy Museum mentions a bath mat, but I do not remember that item. That isn't to say that it was NOT included, just to say that I no longer have that item.

I have other Sindy pieces still - not everything - but a good sample. Let me know if you'd be interested in seeing them here. Our Sindy Museum also shares photos of the Marx Sindy collection.
Posted by D7ana at 3:02 PM 11 comments: Links to this post

Rosi from Joisey shared this information - thanks, Rosi!

Okay, PerpetualKid lists these as out of stock now, but here are two items you might add to your playscale accessories list: green plastic garbage bin and blue plastic recycle bin. The bins are 5.75 inches tall x 2 inches wide x 2.5 inches deep so your playscale dolls will have plenty of room for their trash.

Moreover, the bins have wheels as well ... some of the kids want to know if they can "ride" in the bins. Sigh. You were warned.


First, I want to state that I have brown eyes. I have NEVER wanted any other eye color. Why not? Because I was born with brown eyes. They allow me to see - a little less sharp than many - but I see. I love my imperfect brown eyes because they are mine. Nothing against blue or green or hazel or any other eye color. If I had been born with any of those colors, I would have loved them. Genetics gave me brown. Period.

I mention this stand because I do not want to be compared to Pecola Breedlove of The Bluest Eye by Toni Morrison. No longing for another eye color here. Any eye color has the potential to be beautiful.

Yesterday, I was clicking cat-themed pins on Pinterest when I came across this infographic that reminded me about several of my Mattel black dolls with blue or green eyes. Well, I assumed that those dolls depicted people wearing contact lenses. Because … black people do not have blue or green eyes unless they are mixed race. Blue or green eyes are only found in White people. Right? Cough. Wrong. Any race can have [almost] any color eyes.

When I did not find the original source for that pin, I delved a little further to uncover these sites about the odds of eye color and the science of eye genetics. I'll leave you to digest that information. Short story: it is possible.

Oh ... so maybe those black dolls with blue or green eyes are not wearing contacts. Check out these black people who have blue or green or hazel eyes. Now why did I not remember them when I thought of my Mattel dolls?

Do I think that having blue or green or hazel eyes makes a person more attractive? No. Any eye color has the potential to be beautiful. After all, beauty is in the eye of the beholder.
Posted by D7ana at 9:46 PM 10 comments: Links to this post

Which - if Any - of These Dolls Do You Think the World Could Have Done Without?

Short post: this author shows eleven dolls she feels the world could have done without having. Do you agree?

Me, I disagree. I think that all of the dolls - even the out sized Steve Urkel doll - pause to shudder - have a place in American culture. So they have meaning and stir fondness for someone. Maybe they bring memories or reminders of some event in our lives. Moreover, even if people were not or are not fond of the dolls as representatives of bygone television characters, the dolls can provide variation to current collections. While I was never a fan of either Saved by the Bell or Beverly Hills, 90201, I like the faces on these dolls. I would re-body the Saved dolls onto taller bodies - of course - so that their heads and bodies would better suit my taste.

Well, that is my opinion. What is yours? Would any of these be welcome additions to your collection?
Posted by D7ana at 6:05 PM 19 comments: Links to this post

Yes, I just left a post yesterday. I want to start 2014 out with action so here's a post about blogging and collecting goals. New Year's Resolutions? We can call them that although the ideas have been percolating in the back of my mind since my fifth anniversary date, August 21.

What features will stay? Which gadgets can I eliminate? I am referring to the side bar links: AddMe, BlogCatalog, Bloggapedia, etc.


Take more photos so that I can choose the best; be more aware of light; schedule photography practice daily; get a tripod; clear space for setting up photos.


Anyone else with hobby-related resolutions? Please share!
Posted by D7ana at 8:29 PM 17 comments: Links to this post