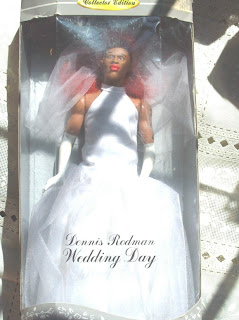 Hey, did you happen to see, the most fugliest bride in the world ....

This has been my BEST International Black Doll Show visit. I talked with a few of the dealers and one doll artist. I even brought a 12” fellow home with me. Before I report my findings, I want to thank Dr. Barbara Whiteman, her ever gracious daughter Robyn Whiteman, and two charming Convention Assistants, Jenna Arnold and Janee Douglas. Thanks to the unknown (to me) convention staff, other Black Doll Collectors' Club members, and Debbie B. Garrett for reminding me about the Show.

At last year’s Show, I spoke with some convention assistants working with Linda C. Hayes. They gave me permission to photograph her offerings for my blog post on the Show and gave me her contact information. This year, I met Ms. Hayes herself. We did not have a substantial talk due to the many distractions of the Show and my wanting to photograph EVERYTHING that she had ;-D

If there were a prize for the most unusual doll offerings, Ms. Hayes would have won it: Among her sales items were the Dennis Rodman doll shown above, Oreo Barbie, Talking Cassius Clay figurine, the Hasbro Destiny’s Child dolls, elusive Shindana dolls Slade and Dr. J, and four 12” action figure outfits. I couldn’t resist the Army Ken – note: I have no military Kens so he filled a void. I mean, Soldier Ken … who could resist?

In case any of the items I mention are on your Wish List, here is Ms. Hayes’ current contact information:

Next, I spoke with Gloria Henson, Dollmaker, about her Angel Doll. Since the Angel Doll is porcelain and not playscale, I will save those comments for my Examiner article. However, Ms. Henson had a dark brown complected My Scene Knockoff doll and a smaller scale Malcolm X figure/figurine. (I could imagine him lecturing my larger playscale figures. We’d go, “Oh he’s sooo cute,” as he paced below us. Nope.)

While the My Scene Knockoff was tempting – amazing how faithfully the knockoff company recreated the Mattel My Scene box graphics - I left her behind too although she was only $5.00. (If you are curious about either item, please see them in my Webshots folder and/or contact Ms. Henson at Glohenson1960@yahoo.com . She might have one or both of them.)

I also spoke to Mayai Chatman who offered a familiar doll that I had not seen in the vinyl: Kenner Dana from the Fashion Model Darci line. Thud. Ouch. That’s my knees hitting the marble floor. Sigh. Now I want a NFRB Kenner Dana. She’s on my Wish List. No, I won’t likely get her anytime soon, but she is definitely on The List.

Anna's Collectibles was there as well. I did not get their card this year, but they had a few holiday Barbies and a few of the denim Barbie Basics dolls.

Other reviews and or comments about this year's Show are by Ms. Leo and Black Doll Collector.

If you attended the Show and you would like to submit your review, please visit here.
Posted by D7ana at 2:58 PM 13 comments: