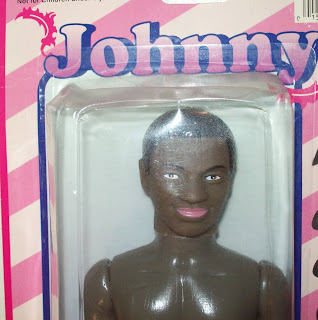 Johnny is a cheap male fashion doll. I use "cheap" to refer to price and to the quality of the material. What's the difference between an inexpensive doll and a cheap one? Weight is one factor. If I hold Johnny in one hand and one of the Chic Boutique dolls in my other hand, Johnny feels much lighter. Details are another factor. If you look at the doll, and you think, not bad, that's an inexpensive doll. You receive something decent for your money. Looking at a cheap doll, you cry for the plastic so abused. Really cheap dolls provoke a full body shudder.

Johnny falls under the cheap category, but ... he has something most cheap dolls and many better priced dolls lack: ethnic identity. Johnny has African American features. He's NOT a "White" doll in "brown" plastic. He's a Black doll.

Oddly enough, no company claims Johnny as their own. The company printed on his box, Ocean Desert Sales of Philadelphia, PA, only distributes products to various dollar and discount stores.
Posted by D7ana at 9:58 PM 16 comments: