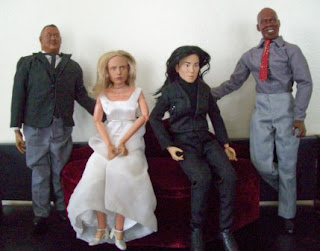 Once upon a time, it was easy to differentiate a doll from an action figure. Dolls had limited articulation and usually rooted hair. They wore cloth clothes that could be put on and taken off. Action figures had molded plastic clothes that were part of their plastic bodies; they had molded hair or molded headgear. Action figures were articulated in several spots to allow them to move. So what are the four characters in this photo? Dolls or action figures?

The four figures from left to right are

So how can you tell that these are action figures?

2. The demeanor of the figure and expression of the eyes. Action figures look at you or look away, but their gaze usually is more remote than fashion dolls. Fashion dolls flirt. They are sooo happy to see you. Or they really, truly do NOT care, they are above you, they ... hey, do YOU notice THEM, NOT noticing YOU?! Fashion dolls are divas. They crave attention.

Action figures would rather you NOT notice them. They have all sorts of plans that may or may NOT involve you. And if you think that that grin on Tee Hee's face has any ingratiating inclination ... well, let me tell you that Grandma's teeth were never that long. No, action figures are not necessarily evil. They just aren't that into you.

See Odd Job's expression? Does he look as if he wants anything from you? Nope. Come or go, it's all the same to him. And the second Buffy there? (Sideshow's first 1:6 scale Buffy had molded hair.) Well, that Buffy doesn't seem comfortable in that white satin dress. She's thinking about staking the Master, the evil vampire who killed her. Wai Lin? Why is she here now? Why her, why here, why now? And what is Angel up to now?

I could continue, but I made my point. However we use them, dolls and action figures are NOT the same. Not just due to gender issues although here is an article about gender and our figures that takes a similar line to what I've written although it's written by an outsider, a NON-collector/enthusiast. I thought it was an interesting piece. But my ramblings emerge from the mind of a fervent collector/enthusiast. So I am not completely aligned with all of the author's ideas.

When I return to this theme, I'll either mention other action figures or start on the doll end.