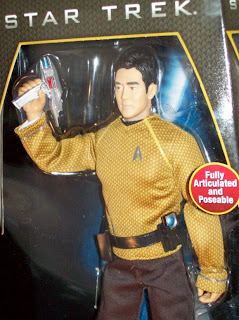 I know I should be downsizing, BUT ... he was on sale. If I waited, I might have missed him. He was only $14.98 before tax. He's an Asian playscale male figure. (Hey, that's part of my defense. How many Asian playscale men can we collectors find? Uh huh. Understood, right? I formally forgive me.)

So what I won't be able to remove the boots. Omar from He's a Doll Yahoo Group and other doll and action figure sites notes that this Mr. Sulu can wear Ken clothes. (Defense argument number 3 - the price was argument number 2.)

Anyone think it was the Ken clothes comment?
Posted by D7ana at 7:56 PM 7 comments: 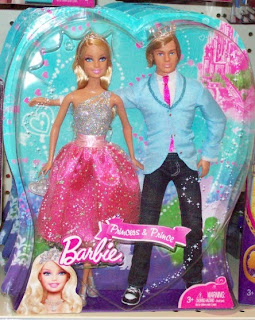 Is anyone else raising an eyebrow about the title on this Toys R Us Barbie set, "Princess and Prince Barbie?"

Now if Barbie were the last name, that phrasing would be unconventional. Think "Mrs. and Mr. Jones." (In the U.S., we usually address or refer to married couples sharing the same last name by the male title and then the female title before the last name. Revise the phrase to "Mr. and Mrs. Jones."

Aside: if the title is the generic "Mr. and Mrs." Position titles would precede the generic ones.

Most toy buyers recognize "Barbie" as a first female name. But inside the window box are a female doll and a male doll. Not two female dolls. Puzzler? No. Mattel probably meant "Princess Barbie and Prince Ken." Sigh. I won't be buying this set because I have the Ken and the Barbie holds no interest for me, but I almost wish I could justify the purchase as an example of the deterioration of the [American] English language.