Brunette Skipper at Toys R Us!

I visited the Cedarbrook Toys R Us today. Not buying, just looking. (That is my story.)

In addition to some of the new Kens - Shaving Fun and a TRU Exclusive Ken giftset - I saw an interesting item. A brunette Skipper with a NEW face and did I mention BROWN hair. Brown hair with pink highlights. Interesting high top sneakers, too. The new Skipper looks like a cross between the Liv dolls and the Best Friends Club Addison doll.

But the same doll listed online has BLONDE hair. Now I wish I had bought the brunette one when I saw her. Sniff.
Posted by D7ana at 3:16 PM 7 comments: Links to this post 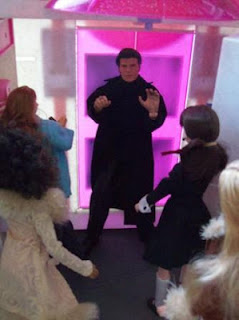 I’m gonna get that b, TJ. Lookit what she’s done to me. Me, the Great [No]Angelus surrounded by a swarm of noisy teenagers. Talk about your basic bad trip. I don’t care how cute she looks when she spazzes out over her mussed hair; this time it’s war, and I mean BLOOD war.

Flashback: Halloween night. TJ had been on me about buying a gray skeleton. Hello? Had she ever seen a real skeleton? Did she think they bleached their bones to glow in the dark? I mean, I went out. I bought that stupid plastic skeleton. Sure it was a cheap one. She was only using it for one night. But, no, I ruined her holiday party. As if the kids would be spooked by that crap. Post Freddy days, TJ. Bad choice on your part.

So, I was kinda peeved at her. Maybe, I felt a little mean. Unappreciated. Hurt. I mean, how many vampires go running to dollar stores to buy stupid plastic skeletons to scare kids who have no fear of plastic bones? Just setting up my defense here.

Few days later, she has fried flounder. No, I didn’t eat any. But ... I poured some of the leftover grease from the fish into her hair pomade. Grease is grease, right? Well, not to Miss TJ. Next day, she goes to straighten her hair with a metal comb. Sets the comb on the stove burner to heat. Then she applies some of the grease to her hair and smooths it out with the hot comb. Her face crinkles in the most adorable way. If I weren’t busy sidling to the door, I’d have taken a photo. She sniffed her fingers, then the pomade. Pomade jar fell out of her hands. She screamed my name – and not in a satisfactory way, I might add – and ran for me. I bolted out of that kitchen quicker than the proverbial bat out of Hell.

(Makes you wonder what’s a bat doing in Hell? Sure they’re ugly suckers – ha, ha, pun intended … whoooo … I crack me up sometimes – but that’s got nothing to with their moral character. Note to self: look up the bat in Hell reference.)

Anyhoo, I have had to avoid Ms. TJ like the proverbial plague. (Understandable that because who wants to cuddle up to a plague? I mean sickness and death, all that rot. Rot? Hooo hooo! If TJ doesn’t get me, I will with my own jokes. Hoisted by me own humor.) No sense of fun, that TJ.

But you are wondering why I am here at the Spendthrift Mall. Why I am being assailed by teenage girl voices and grubby teenage girl hands? (Didn’t girls used to aspire to be ladies? Didn’t they used to wash their hands? One minute they have their hands in their mouths adjusting wads of wet gum – eewwww – and the next, they are grabbing my person. Hey!) But back to the present. How did I land in this fate worse than death – and I did death so I know of what I speak.

Ms TJ the B. Yeah, she tricked me into coming out of hiding. Hiding? Well, maybe just a sabbatical. I mean, I wasn’t really afraid of a slip of a chick like her. On her tippy toes. Not even on solid flat feet. No, I was just chillin’. Giving her time to remember what a hoot I am. So she sends my buddy Barnie after me with this fake truce. Oh, she misses me. Could we please hang out at the Mall as neutral territory? Meet as though nothing ever happened. Made me think all was forgiven. Famous last dumb thought. Can’t believe I fell for it.

Barnie now – being an old-school vamp and none too hip to the ways of women today – fell for the deception. Barnie wants to woo teenaged girls because he thinks that is the in thing. Whiny, self-absorbed teenaged girls who lack the rudiments of decorum and hygiene. Oh and the horrible din of their high-pitched prattling and the impertinence of their dirty paws. Shudder. Any guy, vampire or other, who’d think the tender flesh was worth enduring all that … well, he can’t be too bright. Poor Barnie.

Whoa. Poor Barnie? Poor me. TJ told these fem-gnats that I booked some vampire named Edward – a sorry vamp poser, if half of his history is to be believed – so now they are after me. So I can help them flay this punk. Like I would hang around some vamp glow worrm. A dumb vamp who lingers around high school seeking the company of teenaged girls. Actively seeking them. You feel me, right?

Dumb vamp is smitten with a drip called Betty. Betty keeps begging Edward to bite her so that she can live with him eternally. Like being a vampire isn’t hard enough. Yeah, let’s live with a teenaged girl forever. Her always expecting a guy to gaze into her eyes. Do nothing. Be nothing else. No sports, no solitary jaunts to the woods. Nada. Lookee me, lover. Lookee me. Now that is Hell.

Shriek, buzz, shriek, buzz … girls surround me. Insistent that I yield up that pathetic excuse of a bloodsucker.

I’m not going to kill TJ. I’m not going to turn her. But I will get her back for this. Her hair is her weakness. I gotta figure out how I can muss her hair real bad …
Posted by D7ana at 3:04 PM 8 comments: Links to this post