I attended the International Black Doll Show today. The bulk of the show was "art dolls." Paper bags, ceramic, cloth, and various other materials formed these dolls. Interesting to see, but not much I would take hone. I missed my plastic and vinyl people. No Princess Zara line or Mixis or new ethnic playscale, plastic dolls or action figures.

I had visited this show before a few years ago so I was not surprised by the doll types. At that time, there were no playscale figures. Today, about four or five vendors had at least one Black Barbie or Black Barbie-clone doll. One vendor had a display of Black Barbie-clones dressed in formal gowns. (That vendor did not allow me to take a photograph.) Another vendor had a decent group of modern fashion dolls, including Black Barbies, Christies, Nikkis, and the larger scale 16" fashion dolls. The most impressive table though was by a visitor-exhibitor from Chicago who showed three dolls from the Byron Lars' Chapeaux Collection: Sugar, Coco, and Pepper.

Seeing the Byron Lars dolls in person, I could appreciate the details and the lovely hatbox cases. That gave me an idea: I could store some of my dolls in similar hatboxes or cardboard boxes sold in A.J. Wright, Ross, Conway, and other discount stores. On the other hand, I wouldn't want the Lars dolls since they struck me as show dolls and not play dolls.

Since none of the modern dolls shown were particularly thrilling ... a Ballet Black Barbie and Kelly set and a Cool Lookz Trendy, Bendy Christie, I didn't ask to photograph them. Here are two photos I took. 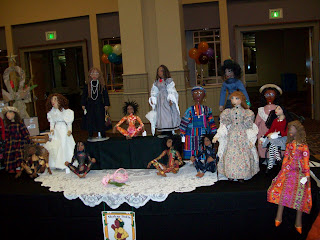 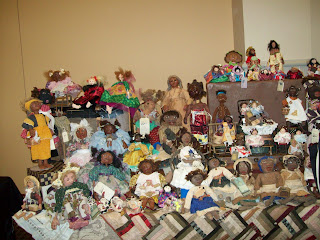 Overall, I enjoyed attending the International Black Doll Show. Seeing different doll types. Perhaps someday I'll rent a table at the Show and put up a modern doll and action figure display. Someday.
Posted by D7ana at 7:16 PM 2 comments: Links to this post