June must be Accidentally Seventies month. The Sunshine Family, Tuesday Taylor, now Jody, the Country Girl doll have been mentioned so far. Jody was the product of an idealized vision of the American West as shown on popular television programs like Little House on the Prairie and Sara.

Jenny Jones and Baby John were walking down Old Country Road when they came across a quaint building. Lo! It's the barn of Jody's Horse and Farm. Jenny can't resist a peak inside. Oh, so bare. Well, Jody's in a sanitarium, and the Horse ran away. (He got hungry, see.) 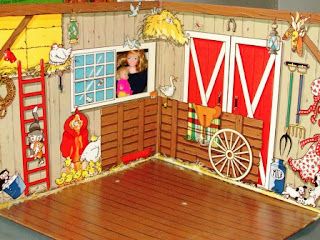 Perhaps you are curious about the exterior? Well, here's how the other side looks. The exterior of Jody's barn on her Farm: 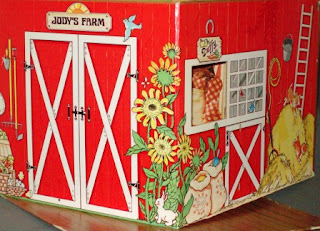 I had the Country Kitchen, the Victorian Parlour, the Schoolhouse carrying case, the shown Horse and Farm, and I think the General Store. Had two Jodys as well. (But not the Black one, alas.) Jody was always sick from an overload of saccharine storylines.

For additional photos of the Barn part of Jody's Farm, see this Webshots folder.

Additional readings about Jody and photos of her and her Country Kitchen playset can be found here.
Posted by D7ana at 11:40 AM 9 comments: Links to this post