Holla to Skippercollector - Skipper Gets a Horse!

Hi Skippercollector! Remember I mentioned I *had* something for you? Well, here it is ... 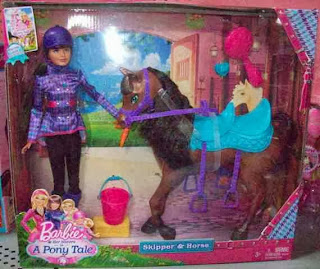 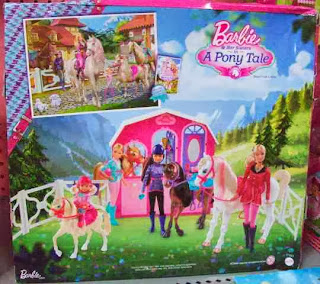 I was not sure if you saw this Skipper set. The brunette Skipper is being reissued again ... this time with a chestnut horse. (Aw ... their hair matches.) On the plus side, she doesn't seem to wear colored plastic/molded on pants like the Barbie with the horse in this series. I can't tell whether her knees are click bend or articulated though. (If you've seen this set out of the box, please let us know which knee style she has.)

On the down side, the double saddle is molded to the horse so it cannot be removed. Sigh. That information about the saddle is mentioned in one of the Amazon customer reviews.

Horse and Skipper fans, this might be your set.

Sandra Bernal of The Doll Cafe shared exciting news on the So in Style Facebook page: the Prettie Girls by One World Dolls will be arriving November 2013 according to this new article. Shriek. The expected price per doll will be between $16-$18 each. Not a bad price for fully dressed and articulated fashion dolls. Shriek. "New" articulated, playscale fashion dolls!

The One World Dolls website also includes promotional items like Prettie Girls tee shirts, water bottles, and coffee mugs. Nice for those interested in branded items, but not something I would buy. Show me the photos of the fashion dolls - not the cartoons but the actual dolls - I'm excited again. Here are refresher links showing each of the dolls in case you missed my earlier post on them:

Additional news about this doll series can be found online. The One World Doll Project's mission reminds me of Kenya doll's mission. Positivity for girls. Then again, ethnic fashion dolls and action figures - especially those produced by ethnic manufacturers - tend to stress pride in ethnic/racial identity.

Suspicious because these dolls were to have been produced two years ago? Or maybe you do not like the face sculpt? Still not thrilled? Think of the re-bodying potentials ... evil cackle.
Posted by D7ana at 11:08 PM 15 comments:

Want to see the new Mattel JLo doll ... um ... nude? Check these Flickr photos that start here. Looks like the YNU Group, Inc.'s Mixis dolls, BBI Perfect Body action figures, and the Get Set Club dolls will need to guard their titles as most full-bottomed. I have pulled up some older photos showing body profiles of those other dolls/figures. For comparison ...

Below are links to photos of a playscale boxing ring produced by M&C Toys under their Star Runner line for Vanessa and for anyone keen on creating such an arena for their dolls and figures. I did not buy the boxing ring or the gym or - alas - more than ONE of the Star Runner action figures, but I do wish that I had bought some of the other guys.

the boxing ring itself

two figures in the boxing ring

I don't know anyone who has this set, but the photos might stimulate ideas on how one manufacturer created a 1:6 scale boxing ring.

Happy creating! Do share the link(s) if you create a boxing ring scene.

P.S. The post for SkipperCollector is post-poned (get the joke, lol) because the photos need to be clearer.

SkipperCollector has a post about 12" Lone Ranger and Tonto dolls. The horse-riding duo come from Disney, but you should view her post and read her description before going to the Disney site. I had a laugh-out loud reaction to her description of their undergarments ;-)

As you may have guessed, Hot Toys, has also got a Tonto for sale. You can see gorgeous photos of him at OneSixthScale Pictures and at Monkey Depot. Sideshow Collectibles is another dealer selling this figure. Price? The Hot Toys version costs $204.99 which does not include the $10.00 shipping fee. Gulp indeed.

Mid-September. I get one of the best e-mail messages a blogger can get: a long-time fan, Rosi from New Jersey, introduced herself and shared some Big Lots! sales information. I love hearing that someone enjoys reading my blog AND that they have been doing so for a while. Yippee! And even better, she's going to start a 1:6 scale diorama-focused blog. Yay! Soonish.

So folks, clear your calendars to allow for more blog reading. And you might want or need to clear some shelf space too. Check out these sales:

I visited the Norristown Big Lots! where I saw the Twilight and Hunger Games dolls, but no M&C Toys 12" figures. I didn't see the Ghostbusters guys there, but I suppose they flew off the shelves here. Shrug. While I enjoy having different male face sculpts, I do not have to have them all. I would only get them for resale value so better a Ghostbusters enthusiast have those figures.

P.S. If you are curious about whether Mattel created 12" figures of two other Ghostbusters characters, Peter Venkman and Winston Zeddemore, yes, they did. Whether Big Lots! has them or will have them, though, I do not know.

Happy Hunting! And how about applause for Rosi! Thanks for sharing this information.
Posted by D7ana at 7:55 PM 4 comments:

Note: to the prurient, Ryan is not naked. He wears flesh colored underpants. Ta!

Although his body has different shades of complexion, I am glad that I did not have to find a set of ankle-feet for him. He is much happier now. I just have to find that other boot-foot to give him back his left foot. Yay, Roxanne, for sharing your discovery and pushing for the unveiling of Ryan's feet.

I saw this - new to me - Merida the other day. No, I don't memorize all of the Disney Princess dolls. I haven't yet seen the movie Brave yet, but I recognized - just - Merida. She is one of the recent Disney Princesses. She has the shorter Disney body, a Twilight Barbie pale complexion, and lots of bright red curly hair. Her original coloring reminds me of a younger Amy Pond from Dr. Who. Spunky, blunt, and straightforward. But this Merida has a light suntan. Uh oh. Oh my. Merida, what happened?

Speaking of seeing Disney movies, I have a confession to make. I had thought  Disney movies were too saccharine for me. Thought? No, I damned them as being too mushy. Well, I recant. What? Yes, I, Dana Cooper, being in a relatively sane mind, do confess that I have recently enjoyed a Disney movie. I watched it THREE times in one week.

Which Disney movie? The Princess and the Frog. Guess what? Yes, you have it - I LOVED the movie.The soundtrack didn't completely win me over, but I loved the story of hard-working, dream-focused Tiana. I liked her loud but lovable friend Charlotte, party playboy Naveen, the evil Dr. Facilier, Mama Odie, and even ... gulp ... Ray. I've taken your advice and now I'll follow this movie up with Brave and The Little Mermaid - the former, because I like spunky heroines and the latter because I want to see how the Ariel character appears.

So if you have been longing for a suntanned Merida, she's ahem available.
Posted by D7ana at 9:47 PM 10 comments:

Have I mentioned that I use Pinterest? Ha, ha. Of course. Countless times, you will remind me - you with an exasperated eye roll. Sigh. Well, someone might have missed the Pinterest mentions I have sprinkled throughout recent posts.

Sometimes, I have not been able to pin an image to Pinterest. Oh no, you think. Oh, yes, I reply. Or maybe the image is not what I would like it to be. Like when my Amazon review pin shows the Amazon shopping cart. Audio: sound of teeth grinding. Sigh again. The default pin mechanism does not produce the desired result.

Research and find a way around the problem.

So I've copied and pasted a PrintScreen image into a Microsoft Paint file. Saved that image on my computer then cropped that image using Microsoft Office Picture Manager to remove the website title, tabs, other non-relevant details. Then I save that edited image. Close the Picture Manager program. Open GIMP2 program and export the image as a jpeg - change the extension to ".jpg" and choose JPEG as the file type. Then I save that image. Close that image to my computer and close GIMP2 program. Open Pinterest and upload that last version of the image onto the board of my choice. Add the original website to the Pinterest pin description.  Several steps but mission accomplished. Yay me!

So what is my problem? Sometimes, I cannot save the extension to a jpeg file. So I would like to see an official - or unofficial - manual on GIMP2. Not the "help" file that came with the program. Something created or ahem processed for end-users without computer programming backgrounds. Any suggestions on a book preferably so that I can read it while I am in transit, etc.

Thanks in advance for your responses.
Posted by D7ana at 9:51 PM 6 comments: 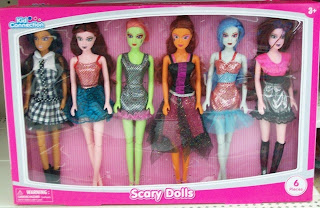 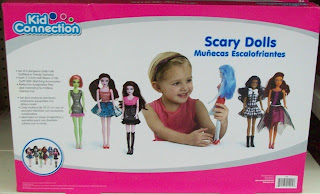 I wanted to check another Walmart to see if that one had the Fashion Madness guys T.J. and Dwayne. Alas, they did not. However, I did find an interesting sextet of  inexpensive fashion dolls by Kid Connection: Scary Dolls.

The back of their box offers this information:

Each 11.5 Inch Doll Wears a Fab Outfit With Matching Accessories

Perfect for Imaginative Play and Hairstyling for Endless Fashion Fun


Yes, these are another set of wannabe Monster High dolls. Like last year's Midnight Magic dolls by Lovely Patsy and this year's Scary Fashion doll by Just Kidz. More monster fun for the upcoming Halloween scene.

One doll has brown skin with white lips - I get it, snap! Her scary power is ashy lips. Ha, ha, ha. Another doll has orange skin (flame doll?), another has blue skin (water or ice?), another has dark pink skin (a la Draculaura?), another has bright green skin, and the last has "regular" pinkish skin.

The articulation, however, is limited on these dolls. Head, shoulders, probably hips, definitely knees. No elbow articulation. Still for $19.97 a sextet, that's not bad. The black-white plaid dress looks cute - also the purple-black flouncy dress worn by the orange-skinned doll. Blah accessories, yes. But in spite of the dolls all having the same blank pretty face, Kid Connection did provide variation in the complexions and the hair styles.

So these are on my Maybe list. What do you think about them?
Posted by D7ana at 9:08 PM 12 comments:

Denise and Kenya Now in Philly!

I checked in a Philly Walmart, and who did I see? Why, the 2013 Kenya and her best female friend Denise. Yes. Good to see them here. Well ....

Denise might come in more than one complexion, too. I thought that was a nice touch. Denise has a different face mold. Her grin is more toothy than Kenya's; her face looks flatter with a lower hairline. 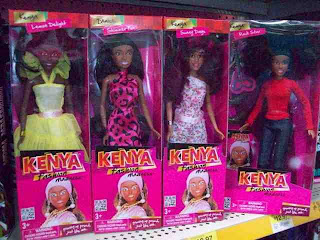 
I did not see either of the guys or Keyshia in this Walmart store.


I am a little disappointed in the Denise doll. Both dolls' heads look super big. Some of the dolls are wonky-eyed and wild-haired.


Have the new ladies reached your area? What do you think of them?