Have a Target gift card that you want to use? Here are two Target-exclusives with perennial play themes. One is ballet-themed; the other, wedding-themed. Anyone remember Tomy’s Nina Ballerina? “The beautiful dancing doll?” Here's a photo of Nina on the box cover. 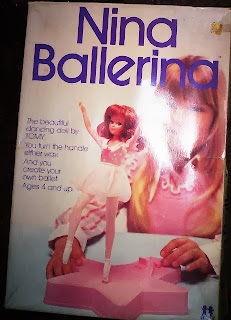 Fast forward to the first giftset called "Barbie Holiday Ballet," which reminds me of Nina and her pink star stage. These four dolls come packaged on a “performing stage” where they perform a ballet: they turn right, left, or spin around. Wheeee! The dance troop consists of 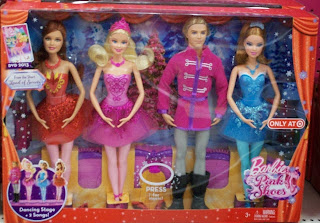 
Stacey swaps out for Skipper. That’s different, yes? Mmmmuh. If I were to create a Wedding Party Doll giftset, I would have


Barbie’s younger siblings are cute, but I would think that the bridesmaid should be – well, around the bride’s age. Flower girls can be and should be young: the function is to look cute and to strew flowers along the bride’s path. (Note to self: if I ever marry, no flower girl – those cutesy flowers might cause me to fall. Hobbling about on crutches is not my idea of honeymoon fun. Do people ever think of that? What romance is there in trampling dead flowers?)

What and who would your doll wedding party include?