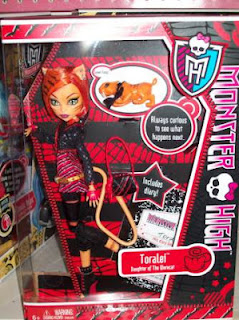 I have remained steadfast against buying any of the Monster High dolls. Their heads are too big; their bodies, too emaciated. Sigh. Well, I may have met the one Monster I might not be able to resist. Isn't she the cutest? Red hair, green eyes, and orange complexion. She's a Were-cat.

Link to Examiner Article on Ethnic DAF Hair Plus Sideshow

For those interested in the postponed blog post about Ethnic DAF Hair: B is for Braids (and Locks and Knots), I have submitted an article as the Philadelphia Doll Collecting Examiner on a similar topic. Yes, me having that title is old news to some of you. I have not been so active on that site, so many - okay, ALL of you might have forgotten.

The photos in the accompanying sideshow were taking outdoors. OOOoohhh ... so you get to see some East Philly dolls and action figures in a Philadelphia park.


P.S. The braids article for PhillyCollector has been postponed because my star model - Naomi - is missing. No, she didn't go out with the others. Sigh. I have sooo got to sell stuff. Too overcrowded here.

I have a Remco finger puppet of Davy Jones. I cannot find him to post here. If I find that head puppet, I will post it later.