One of my favorite fashion dolls in the late 1970s was Tuesday Taylor. Her scalp swiveled so that she could have blond or brunette hair. (Half of her scalp had pale blond hair; the other half had brunette hair.) Guess what side I preferred? Remember that was back when blond Superstar Barbie reigned. So my Tuesday Taylor was always brunette.

Tuesday's black friend, Taylor Jones, had a similar hair option only her choices were auburn and black. I prefered the auburn for her because I felt that it worked better for her light eyebrows.

I should note that ALL Tuesday Taylors had light blue eyes. I darkened them to navy when I was younger. The default color of the dolls match that shown on the doll box. 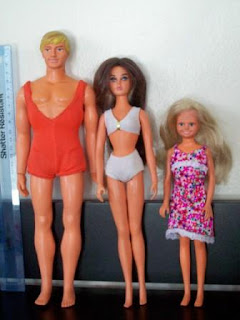 This photo shows the basic Tuesday Taylor and the basic Taylor Jones: 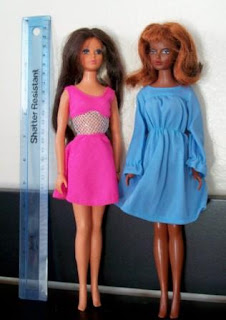 The issued dolls were ...

I have updated this post to include the information about Taylor Jones' hair choices - thanks for the reminder, DBG. DBG might have the Fashion Model Taylor Jones doll; I look forward to hearing more about that doll from her.

*Dodi has the same face and mold as Dodi from the Tammy series. That Dodi was the friend of Tammy's little sister, Pepper.