New Blog About Asian and Other Fashion Dolls

One complaint about the S.i.S. dolls by Mattel is the lack of hair variety. The one straight (Grace), one curly (Kara), and one tightly curled (Trichelle) was not representative of most Black women's hair styles and textures. Interestingly enough, Mattel has produced a variety of Black hair styles and textures in other series. In a previous post, I had shown the variety Mattel achieved with one head mold. Please refer to that post for statements about the hair styles for three of the dolls shown - Harley Davidson Barbie with braids and the two swimming dolls with curly hair - in the first photograph below.


Variation in (Black) Hair by Mattel 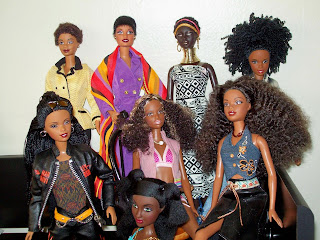 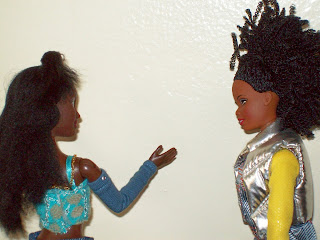 People concerned with ethnic authenticity allow that Black hair can be long, but they would find that the texture is usually coarser, curlier, and/or "heavier" than "White hair" or "Asian hair." Black hair is usually NOT "flippy, tossable." See Kiyoni Brown and Nichelle in the photo above. With the Denim and Diamonds version of Kiyoni Brown, Mattel captured this heavier, coarser hair texture. Kiyoni's hair looks like it could have been straightened with a hot comb. Nichelle, in contrast, has slightly relaxed, corkscrew curls similar to but mercifully NOT wet and greasy like the Jheri curl hairstyle worn during the 1980s by Rick James and Michael Jackson.


Here is Kiyoni alone for a closer look at her hair: 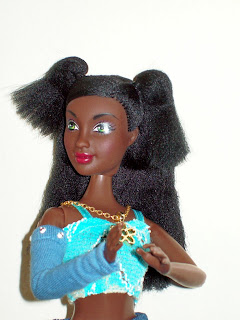 Use of some of these hair styles rather than the default straight or wavy hairstyles used for the S.i.S. dolls might have satisfied the "authentic" requirement.
Posted by D7ana at 9:04 AM 6 comments: Links to this post