Which Black Fashion Dolls and/or Action Figures are Your Favorites This Year? 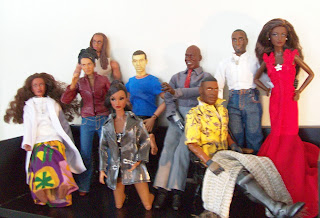 Here is a photo of my ten favorite Black dolls and action figures as of today. Tomorrow, I might choose an entirely different set. Maybe. Maybe not. At first, this list was to have ten dolls AND ten action figures, but I pushed myself further. Come on. Try for ten including BOTH. And so we have these choices ...


from left to right:

Vanessa from the Get Set Dolls
One of my first "real Black" doll faces. Love her masses of curly black-brown hair. Doctor V.

Martha Jones from Doctor Who (Character Options)
Another "girlfriend." She left Britain (Wales?) and aliens to stay in East Philly. Yay, Martha! And you don't have to chase after that aloof but goofy-adorable Doctor. Unrequited love seems like a dreadful disease.

(behind Martha; with braids) Tyr from Andromeda (Bbi)
Cutie. Love the dreads on him - Black Samson, hey? Soulful eyes, too. Needs his poor leg fixed, too.


(seated) Wiz from X-Boy (Dragon)
Another cutie. Sigh. He actually sat still long enough for someone to put all those knots in his hair.

(kneeling) T.J. from Dynamite Girls (Integrity Toys)
What can I say? She has more attitude than the others. The Eternal Pout. And don't touch her ponytail!

(seated) Tee Hee from James Bond’s Live and Let Die (Sideshow Toys)
You have to love a guy brave enough to try and pull T.J.'s ponytail. Sigh. I love his amiable but slightly deranged look.


Power Team figure (M&C Toys)
He reminds me of an uncle - one of my uncles. This 1:6 scale guy is cooler though, lol.


Go for Red Barbie (Mattel)
What a woman. Check her poise and her pose. She rules this world, no doubt about that.


Uh oh … there are nine figures there. I missed one. Actually, I could NOT decide on the tenth doll or action figure. Should I choose one of my two hunky Hot Toys guys? Another Power Team guy? My Slumber Party Skipper? Opal or Emerald? Valerie of the Pussycats. Decisions, decisions ...

What about YOU? What Black dolls and/or action figures do you favor? If you share your list from your blog, I'll submit a post so that more of us can view them.
Posted by D7ana at 11:13 AM 4 comments: Links to this post