The Asian-Pacific American (APA) fashion doll and action figure list will be published in two posts. First post would be manufacturers 21st Century to L; second post would cover M and C Toys to YNU Group. I am trying to decide whether to post photos separately - text and links in the post with the photos separate in another post. Hmmm ... Also, I am trying to decide whether I want to list dolls and figures that are specifically APA or if I am going to cheat a little by including Asian-looking dolls and figures that can become APA for enthusiasts wanting more representation. Sigh. Maybe my using the verb "cheat" answers my problem.
Posted by D7ana at 11:17 PM 2 comments:

Big, Bad Toy Store has some Barbie previews of the Ballet Wishes doll, the 2013 City Shopper dolls, and two new The Barbie Look fashions. The pre-order cost is $29.99 for each doll and $24.99 for each outfit. Expected issue date for the dolls and the fashions is June 2013.

Ballet Wishes has blond upright hair and what could be the Mackie face mold. Her knees might be jointed bend knees. Her arms seem straight, no bend at the elbow.


City Shopper 1 has brown straight hair and what could be the Mackie face mold. Unfortunately, she looks as though she has the Model Muse body as 2012 Barbie Look dolls.

City Shopper 2 has blond straight hair and what could be the Ana/Drew face mold. Model Muse body.


The new Barbie Look fashions are called Ski Fashion and Grand Ball. If you have not seen the dolls or the fashions elsewhere, you can find them at BBTS.
Posted by D7ana at 11:06 PM 7 comments:

Wishing for a Directory for Doll Enthusiasts?

Well, save your wishes for something else. There is a new online doll yellow pages created by Simon Farnworth that you, my fellow doll enthusiasts, can likely join. At no cost. That's right - it's called Doll eDirectory, and here are three reasons to join.

1. More doll enthusiasts can find you. The Directory has 600 members since it opened in February 2013. Maybe you know them all; maybe not. Isn't it worth getting more readers for your blog or Etsy shop or website. Free advertising.

2. You can find other doll enthusiasts. Need a nude, good condition Integrity Toys' Ayumi? Check the Buy and Sell Group. You might find her at a good price.

3. We doll enthusiasts can imprint our hobby online. Collecting and playing thrives online and off. Hooray for us.

Last year, Grace got one. This year, it's Trichelle's turn. Alas, it seems to be the same purple convertible that Grace got, maybe in a little bit lighter shade of purple. Plum? Sigh. This time though, the car actually belongs to Trichelle, courtesy of the back of the box photo shown here. 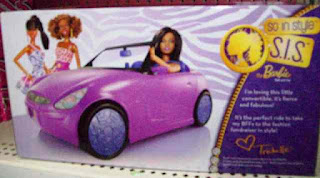 Here is a close-up showing the new Animal Print Trichelle seated in her purple convertible. 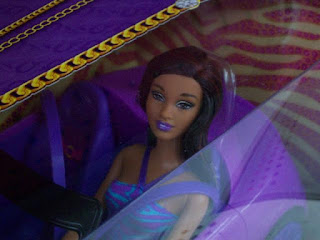 Anyone else of the opinion that the So in Style gals could use another color and style of car?
Posted by D7ana at 1:50 PM 16 comments:

No, I did not find a pregnant Barbie. Barbie never has taken on the role of "Mother;" my guess is that motherhood would impact her role as fashion model. (Really though? What about Cindy Crawford, etc. But that's never been an option for Barbie ... probably because it would bring in the taboo of sex and a children's toy. Shhh.)

No, the new career is Magician. Alas, I cannot upload my photo of the new "I Can Be ... Magician" Barbie doll. Yet. But this Barbie has a cute rabbit companion nestled in a purple top hat. It is the third playscale rabbit - after Liv doll Hayden's brown rabbit and the thin white rabbit that accompanied one of the 2009 "Think Pink" Barbies - that I would like to add to my collection. The rabbit is the best part of this doll set even if its head is slightly oversized.

I suppose the purple gown and accessories could be an improvement over the omnipresent pink, but not by much, I find. I would have given this doll a black sequin dress with a black felt top hat and a black or silver wand. But I suppose purple is a preferred color for the target audience that begins at 3 years old. (Wince. I forget how young the current Barbie doll target age is.)

So if you have been waiting for a magician Barbie, there is one in the "I Can Be" group. What do you think?
Posted by D7ana at 6:48 PM 13 comments: They were dubbed "The mother and the baby of today" in 1973. That's right I'm talking 9" Jenny Jones and 2.5" Baby John. No Mr. Jones was included or mentioned on the box or in any of the advertising. Jenny wears a silver "band" on her left ring finger so the assumption was that Jenny was married. No one complained about the lack of a husband in the box, but those were different days. Sigh.


Mothers appear in other fashion doll series. Jenny reminds me of other playscale mother dolls even though she was a little "hipper" than most. I will be posting a list of playscale mothers this week.

Ada Has a Promotion Photo of

Ada of Papuslie Mele has a promotional photograph of a new Monster High doll, Catty Noir. Ms. Noir is a rock star. So for Monster High fans keen on werecats, there is a new one. Additional photos of Catty Noir can be found online.

What else does May hold? Mother's Day. That means a special Mother's Day post. I can share photos of established (by manufacturers) doll and/or action figure mothers and their children. Midge and her parents, etc. Then I can also show mother(s) and child(ren) pairings created by me like Color Rave Janay and a Mattel Prince.

And how can I forget the International Black Doll Show held at the end of this month? Alas, as most of you probably know, the Philadelphia Doll Museum will NOT be doing the Show this year. I might have a tribute post about that.

I am organizing my collection so I'll share insights and tips on that project.

And I want to do a Mixis doll promotion ... so I can be sure that I can someday have those unreleased dolls ....