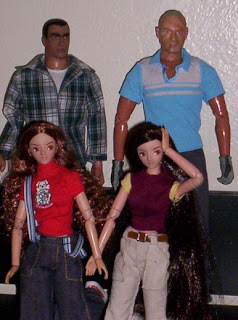 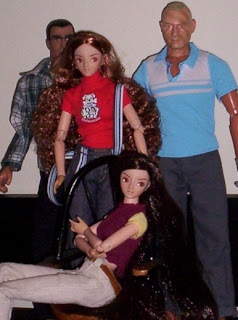 Welcome from some citizens of East Philly.

Vinnie and Taboo decided to share an apartment when they arrived in East Philly. Some Kens and some Joes said that the new guys were gay; Vinnie and Taboo denied being more than rooom mates. Vinnie works in construction, cooks Italian classics, and knits (shhh ... only when he feels stressed). Taboo is a car mechanic who used to work with Michael Chan. Taboo does not discuss what he did when working with Mr. Chan.

Chestnut-haired Kana and brunette Kat are sisters. Kana petitioned Vinnie and Taboo to act as their parents so that the girls would not have to live in the local orphanage. Vinnie and Taboo agreed; the guys wanted witnesses to them being "straight." The four moved to a house next door to Baptist minister, Reverend Isaiah Ezekiel Hadley and his family.
Posted by D7ana at 8:47 PM 2 comments: Links to this post