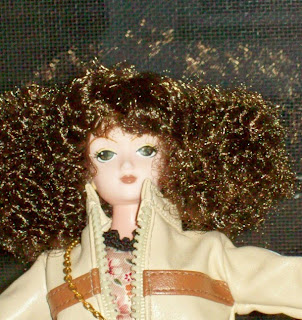 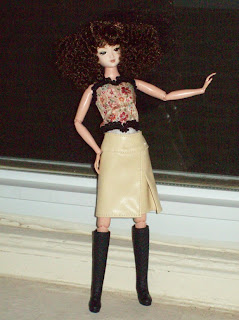 Sharp is one of the 1:6 scale articulated fashion dolls produced by Sonokong of Korea. Anyone remember the Takara Super Action Jennys from the 1980s? Sharp is that size, that build. Another doll in the same group as Sharp is Aeyin, who has half-open eyes. I could tell the difference between Sharp and Ayein by looking at the doll's eyes. Ayein has real eyelashes and half-opened eyes. Sharp has enormous pupils with scarcely any white in her eye and no eyelashes.

There may have been a third doll after I stopped actively following this series. Sharp was the doll I wanted. I bought her from doll collector/doll seller Ashley of Garden of Dolls; Sharp doesn't show on Ashley's website now, but you can write to Ashley to ask if any of the Aeyin/Sharp dolls remain. The Yahoo Group devoted to the Sonokong dolls still exists.

I like her huge eyes and "white" face against her slightly tanned neck. It's like she is wearing heavy make-up.
Posted by D7ana at 8:14 PM 5 comments: Links to this post