Sulu Now and Then Plus a Shocking Discovery 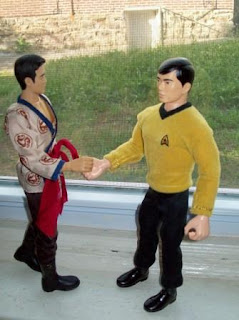 Playmates Toys was licensed to produce 12" Star Trek action figures in 1999 and 2009. I happen to have both versions of Hikaru Sulu . Here's my review on the two action figures - the appearance, the poseability, and my overall response to them. Let's start with the figures' resemblance to the actors playing the Sulu character: George Takei and John Cho. 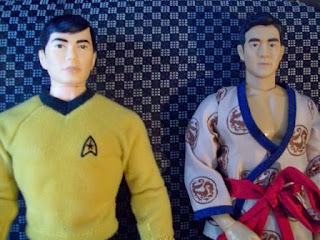 1999 Sulu is modeled after the original Sulu, George Takei. Yay, Mr. Takei. Looking good. Well maybe his face looks a little bloated. I mean the action figure Sulu/George Takei. The action figure's body is top heavy and over-muscled. Nothing like Mr. Takei's. Remember though that like doll manufacturers, action figure manufacturers usually create one body for a series of similar [like all human] characters. This first Star Trek body was probably created with William Shatner in mind. But the face shape and the distinct lip shape make this figure George Takei rather than random Asian American guy. (Nothing wrong with random Asian American guys - just that this particular figure is supposed to represent George Takei. So it's good that the figure does.) The D7ana rating for Playmates' 1999 Sulu? Eight for resemblance to the actor.

2009 Sulu is modeled after the recent Sulu, John Cho. Wolf whistles and stomping of tiny feet. Consensus: John Cho is cute. What about his action figure? Oh no! Playmates, where is the likeness? Here we have a random Asian American guy. He could be John Cho, but then again, his face is too long. Shorten that face a little and draw the features in closer. The hair looks good though. So the D7ana rating for Playmates here is eight for the hair shape, seven for resemblance to the actor. 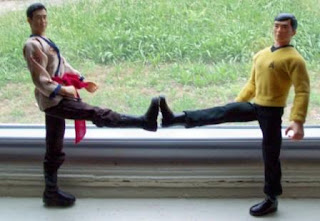 2009 Sulu has a nice lean body, yes! Score another point for Playmates. I mean to the aesthetics of their 2009 Sulu. But whoa, these are action figures, yes? So articulation and pose-ability count. Step down 2009 Sulu: your stiff elbows scarcely bend. The pendulum swings back to the 1999 Sulu. Notice how 1999 Sulu can lift his leg higher than 2009 Sulu? 1999 Sulu can bend his elbows and twist with the best of them. Bulky but flexible, easy to pose. That's charming in an action figure. 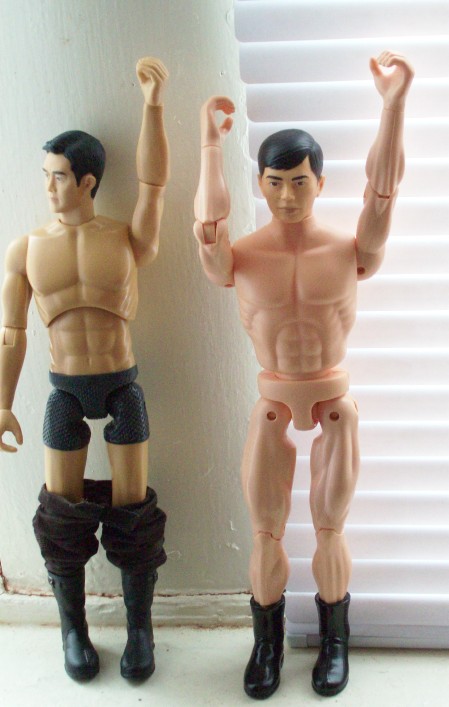 What about re-dressing? Well, as you can see, 1999 Sulu can remove his clothes and be redressed. The boots are forever though unless you kitbash, remove them and replace them with other calf-foot pair. Probably difficult to get a color and a size match. Still, boots are okay. Black boots go with almost anything. He just can't do on the beach scenes. Playmates gets a 9 for this aspect for 1999 Sulu.

And Mr. 2009 Sulu. Well, we can take off his shirt. Fairly impressive chest and torso. If you don't mind the cuts into his side to accommodate his arms. Hmmm ... his pants. Now, I'm not dropping his pants for voyeurism. No. Just want to see if we can change him out of those brown pants. Uh oh. Trouble. I would have to cut off the pants because the brown pants are fitted; they won't easily come off.

Check what lies beneath his pants. No, I'm not talking flesh. I'm talking about texturized underwear. Apparently in rubber tire material. OMG, is this fetish wear for children? Borrow paper bag to blow into. Whiff smelling salts. Shake head. Can anyone tell me what happened between 1999 where Mr. Sulu has flesh-colored bikini by smooth shape and 2009 where Mr. Sulu has black rubbery trunks? Did they have to go to that extreme to cover up his "naughty part" - i.e. American slang for genitals? 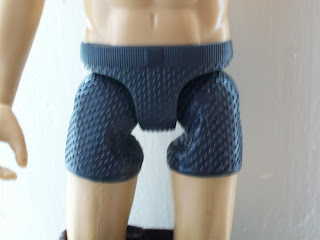 Usually, only dolls have texturized underwear. Either action figures are fully dressed, molded plastic (the tiny ones), or the danger zone (aka male genitals)in the taller figures is covered by "implied" underwear suggested by lack of bump ala 1999 Sulu or more daringly by a smooth single, central bump. This is my first sighting of male rubber underwear. (I don't know whether you would call them fitted boxers or long-legged briefs ...) As an American though, I am shocked by this discovery of texturized underpants for male action figures. Aspirin and then a phone, please.

I need to point out that my perturbation occurs due to this finding on an action figure; dolls have long since had patterned bottoms. Mattel's Barbie, YNU Group's Mixis, others mold raised floral patterns on female nether parts - note, those are NOT diseased butts. On female figures. However, Kens and most male action figures NEVER have embossed designs on their boy bumps or their molded flesh underpants. Shocking.

Action figures should have fun, too, you think? Me, I was uncomfortable with thinking that daughters-unborn-to-me-at-this-time could encounter patterned female behinds and start demanding similar embossed tattoos for decency. (Everyone knows that white paint and/or molded panty lines are insufficient to restrain the rampant sexuality of female dolls.) Now I have to worry about sons-unborn-to-me-at-this-time demanding patterned rubber underpants. (That same everyone aforementioned knows that action figures are NEVER, EVER sexualized. No, action figures are neutral. Why the early Joes had legs attached to the bodies lacking naughty parts.)

Oh and why do I keep calling these guys "action figures?" Aren't they dolls?

Meh. Yes, maybe. No ... I don't know. Yes, I do. These are action figures. You know them by these features, usually not present with male dolls or female dolls.

1. The over-sized hands and the "Get a Grip" pose of the hands. Look at Ken's hands. They are proportionate to his body. Ken's hands are fairly straight, too. At ease hands. Check 1999 Sulu's hands. OMG - what happened? Talk about ham-fisted. He could catch an asteroid with those gigantic hands. Action figure overcompensation at work there. Those hands are meant to do something. My guess? To stress the figure's maleness. Har, har, these be MEN. Men grapple with their hands. They seize things. Little passive hands, female. Big, massive hands, male.

Another possible reason? Because action figure manufacturers realize that doll collectors find the over-sized hands annoying. Over-sized fists torment anyone re-dressing the figure so afflicted. Show you what happens when you try to make a "doll" of our action figures, ho, ho.

2. Molded on shoes or boots in lieu of bare feet. Action figure manufacturers sometimes have a problem with bare feet. Or is it creating shoes? Not always ... but often enough to aggravate the doll collectors seeking to abuse action figures by re-dressing them. Anyone remember the plight of Ryan Whittaker?

There are action figures whose bare feet wear fabric and/or soft plastic shoes and boots. Then again, perhaps, the action figure manufacturers just don't want the kids or the adults to lose small accessories like shoes or boots. Maybe. Then again, it could be part of that master plan to thwart doll collectors from usurping action figures. Tsk.