Awards Night Tawny of the Flavas 2003

How many answered five, not including the Choice Awards dolls? I might have answered so 7-8 years ago. The Flavas dolls seemed to have ended with the Party wave of dolls. For years, I did not realize that the Choice Awards dolls existed. Then I came across the Choice Awards Liam and Tre in a local Value City store. and I knew I HAD to have Tawny. Want-funds-determination all worked to bring a kind fellow collector with an extra Tawny to me. My once Grail doll became a new doll in my collection.

If you are familiar with the Flavas line-up, you will know that the six teenagers are Happy D, Kiyoni Brown, Tika, P Bo, Tre, and Liam. For all the waves except Choice Awards, those are the names of the Flavas crew. Choice Awards has the regular Flavas crew EXCEPT Kiyoni Brown. Instead, there is a new character, Tawny. 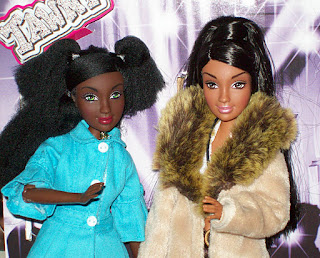 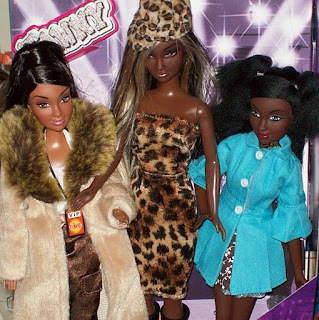 Later this week, I'll submit photos of the deboxing of Tawny. Her wig merits a raspberry, but her loafers and sunglasses are adorable.

Okay, I can barely get the dolls I want at this time. So this link might make you think that D7ana has flown completely over the cuckoo's nest. I haven't. I encountered something interesting on LinkedIn that I wanted to share. You might even find the photos inspiring ;-D

Where can we find a beautiful, stunning recreation of the H.R. Giger Bar in playscale? On the Scales and Models website, look under the Portfolio section in the far left column and click on the third link that reads, "H.R. Giger Bar".