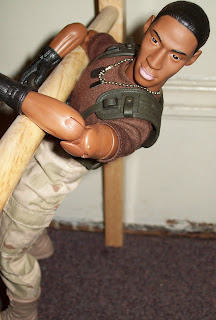 
Why is Power Team Combat Engineer on the Top Ten List?

Another easy reply: he is a good looking guy. Good looking AND intelligent-looking. Piercing black eyes. Serious mien. Furrowed eyebrows - see the vertical lines between his eyebrows. Furrowed they are. This guy does a lot of thinking. Or so I imagine, LOL. Look at his beautiful high cheekbones and the refined flare of his nostrils. Sigh. And the slightly dry lips - note the textured lip surface. M & C Toys knows how to sculpt a dreamy male head.

Granted his body is not quite as gorgeous as his face. The arm muscles look as though they were drawn by a heavy handed artist. Alas, he has glove hands - no bare hands but permanently gloved hands. Guess they did not want him to lose the gloves, given his drilling work, etc. The Combat Engineer has a sturdy build and weight. He can be posed; he can stand alone.


Why is Power Team Combat Engineer seventh on the Top Ten List? 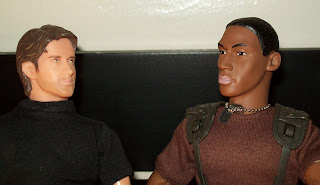 Spots seven and eight could have gone to either Hrithik or to the Engineer. However, the Engineer had the edge and the higher rank because his body is sturdier, he's got those high cheekbones, and his clothes and accessories are better than Hrithik's. In spite of his having a longer and bigger head, the Engineer wins.

Once upon a time, you could find M & C Power Team action figures at K B Toys stores. Sigh. Now you can check Big Lots! stores, eBay, and other collectors for Power Team figures.
Posted by D7ana at 7:41 PM 5 comments: Links to this post