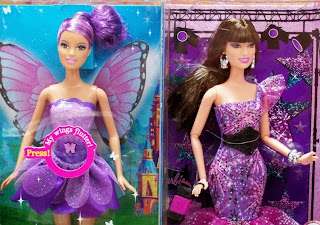 In my last post, I wrote about a thrilling "discovery" - a tanned, purple-haired Raquelle. Well, first Jewel Snake asked about the identity of the doll. Was I sure that the new doll is Raquelle? I looked at the photo I took and  dolls with the other Barbie face mold. Back and forth, back and forth, I looked. But I couldn't see the Barbie in the purple-haired doll. Then an anonymous reader and Ms. Leo questioned the identification of the purple-haired doll as Raquelle. I felt a less certain about the identification I had made.

So I thought: check the head molds. Before I could ask that info though, I found myself in another Walmart store. (Yes, that easily, ha ha. Poof.) Once there, I could not resist the lure of the toy department and the Barbie aisle in particular. The Eureka moment occurred. This store had both an "In the Spotlight" Raquelle AND the new purple-haired Mariposa doll on the shelves. 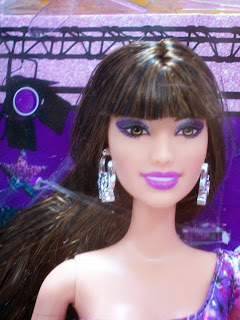 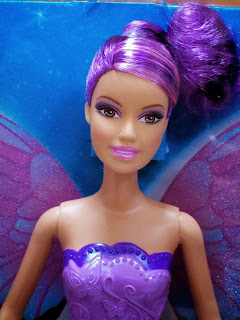 Okay, I see now. Raquelle's nose is smaller; her mouth is wider with thinner and flatter lips. The Mariposa friend has larger eyes that tilt up more than Raquelle's.
Her smile is less toothy. Raquelle's face seems a little flatter. Hmmm ...

So - alas - no tanned Raquelle's yet. I apologize for any disappointment caused.

But good news for Muff - the purple-haired Mariposa doll seems to have a normal-sized head.

Let's thank Jewel Snake, Ms. Leo, and Anonymous for their keen eyes! Applause.
Posted by D7ana at 11:19 PM 10 comments: Links to this post