The Problem with Some Action Figures

Twelve inch action figures expand my male population. I can pick up female dolls easily. Male dolls are limited so I invade the green aisle or the action figure world. I love my Kens, my Stevens, my Kurts, my Alans, my Blaines, my Jordan, my Tariq, my Lukas, my Moses, my John Smith, my Li Shang, my Paul, and my boys. BUT without my action figure guys, my male population would be near extinction. Can't have that kind of gender imbalance.

However, there can be problems with male action figures. No, not the guns and military clothes. I replace most of the military fashions with Kenwear - for some reason, that statement inspires banshee howls of anguish from guys who used to own G.I. Joes or Star Wars figures - what, are my guys supposed to go around undressed? Ken has some normal looking stuff. Or passably so ....

Guns? Well, my guys won't need them so I set most of them aside. If it's a little gun, and it looks cute, I might let them keep it for the look factor. The tough guy look, but guns aren't relative to most scenes I have the guys in. Reminds me, I need to gather all the useless guns and give them away or sell them. Once I find them, of course.

Oh, but the problem with some action figures? Molded clothes that replace body parts. For example, I have Ryan Whitaker from Final Fantasy. Final Fantasy seems to be a video game. (Even less interesting than guns IMO. So the FF trappings are going, going ....) Anyway, he's cute - eyes a little gimlet, but he has nice features - so I am determined to redress him as a civilian. In Kenwear, yes.

Only he has this horrible body armor encased around his torso. I'm not sure if his arms are separate from the armor or if his calves are calves and NOT just boots attached to thighs. So I might have to find a new body for him. That's MY problem with action figures. Some of them do NOT undress the way they should. They should have flesh-colored limbs.

Here are two photos of Ryan: 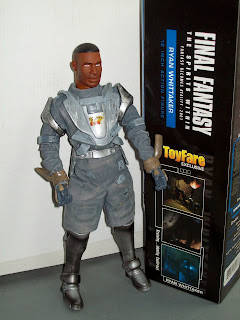 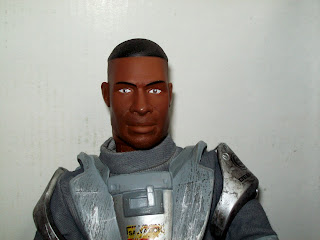 Thanks to My Followers

I thank you for following my blog publicly and for your stimulating comments that inspire follow-up posts. Thanks for enriching this hobby for me.

Sincerely,
D7ana
Posted by D7ana at 7:42 PM 8 comments: Links to this post

While checking online sources about Kayla, Barbie's multi-ethnic friend, I came across an interesting statement regarding the paucity of Asian American ethnic dolls on page 163 from Visible Differences by Dominic J. Pulera.

I have put that book on hold at my free library. The good people at the library will find and set aside the book for me to pick up. (Ah the joys of urban living - grin.) If there are additional points of interest regarding collecting, I will mention them after I have read the book.

Oh, and what about my Kayla research?

A BBC Newsround 2002 article briefly discusses the introduces of Kayla to the Barbie friends group.


And I found a web page showing the Kayla/Lea Facemold by European doll collector, Katti who shows the incredible flexibility of this facemold. Therese, take note: the Sophisticated Wedding Barbie 2002 AA might be that dark complexioned Kayla mold doll of your dreams.
Posted by D7ana at 6:51 AM 4 comments: Links to this post