Tuesday morning, I found a thick envelope in my mail. Guess who the envelope was from? Yes, from LimbeDolls! My late birthday present! I carefully opened it to uncover new LimbeDolls sandals for Liv doll bodies AND three lovely sets of St. Regis Lace lingerie. Well, as you can imagine, lovely fashions like these do not appear daily nor do they go unclaimed. Here's what happened next:

Joss: Why are you calling dibs on them? You aren't getting married. You can't wear them.

Tosh: Not only can I wear them, I'm gonna model them. For today's blog post.

Joss: Even worse. First, that's lingerie for brides - not for single students who don't even have a beau. Second, you are not seriously going to flaunt your scrawniness online. You'll never get a guy if you show what you ain't got.

Tosh: First, as resident Goth, I should be the superstitious one. Not. Wearing them regardless. Second, this is America. You can never be too thin.

Joss: Oh, sure ... anorexia is totally in. Never too thin.

Tosh: I am not that thin.

Tosh: Am NOT. And if you are too insecure, you don't have to do it. Leave it to us professional models.

Joss: I am TOO professional.

Joss: It is my professionalism that stops me from making a career busting mistake like this one.

Tosh: Green does not become you, Joss.

Joss: Green does TOO become me. There isn't a color under the sun that - oh, sometimes, you are too dense to be true.

Naomi: Toshiko, Photographer Ken wants you in the center.

Joss: Really, Tosh ... you aren't going against those boob jobs. Look at those massive mammaries ...

Naomi: Jocelyn, who you calling a boob job? These girls are for real.

Tosh: Joss was kidding ... she didn't mean anything. Let's do this shoot.

Naomi: Whatever. Ken, I got Toshiko with me.

Joss: World remember: I told her so.

So, world, what do you think? Is Toshiko too thin to wear the St. Regis lingerie? Will she bring bad luck to her relationship with her as-yet-unknown groom? Is she destined to remain unwed because no man would marry a young woman who modeled lace lingerie? What do you think? 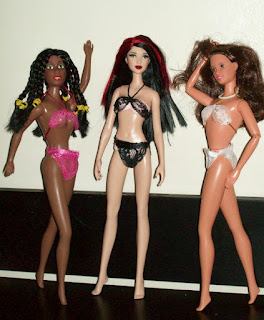