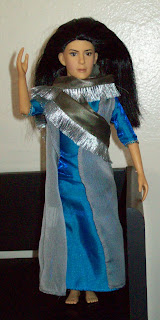 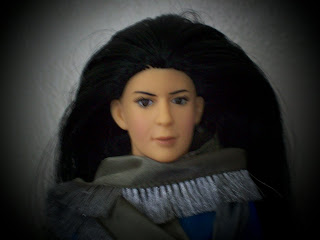 Esther has a strong face. More handsome than pretty. Her face stands out among my other dolls because most of them are pretty or beautiful. Perhaps Esther is a little androgynous? Yes, only where androgyny in playscale figures usually shows as feminine males (the Takara Jenny boyfriends), Esther appears masculine female due to her straightforward gaze, strong nose, and firm chin.

If you press Esther's midsection, she "talks" about her life as a wise, beautiful, and brave woman who helps her people. (Note: she isn't immodest about her assets: "People say that I am as wise and as brave as I am beautiful." "People" say that about her. "Hmmm," I think.) I have accidentally set off her speech when moving her. Interesting that she is one talking doll who actually talks.


Why is Esther the tenth doll on the List?

Proportion. Esther's head is large, and her calves seem short to someone [me] accustomed to fashion doll proportions.

You can find Talking Esther Messenger of Faith at One2Believe.com for $19.99 at this time. Do check to see if you can find her on sale elsewhere though: I bought mine for half that price from KBToys.com before they went out of business. Other sellers might sell this doll series for less.

I would be happy to read any comments or to answer any questions about Esther that I can.
Posted by D7ana at 6:45 PM No comments: Links to this post