This post is partly inspired by another blogger's post about deboxing her Anne Klein Barbie doll. Like many other dolls and action figures and other cool things in my collection, that doll and outfit have languished in the original box - unopened. What am I waiting for? The perfect moment when all is sorted and everything is in its place? I don't know. I just decided that I wanted to have that outfit out and available for one or more of the other dolls to wear. Thanks for that great post, Vanessa!

When I looked at my Anne Klein Barbie doll though, I wondered: do I really want to keep this doll? I mean, I have at least two other fair-complexion, dark haired, Mackie faced dolls. Here they are ... Catwoman Barbie and Kate Spade Barbie. Suppose I had to sell two and could only keep one. Which one will I keep?

Once, I would have thought Catwoman. I mean, Catwoman was my FAVORITE Batman villain, back when I was a child and when I watched the Batman tv series starring Adam West. Catwoman was played by Julie Newmar and Eartha Kitt. Statuesque and tiny Catwoman ... interesting contrasts. My Catwoman doll was to have been the evilest woman in the EastPhilly-verse. But ... her face is a little cartoony. She could still play a villain, but she'd look a little campy.

What about that Anne Klein Barbie though? Hmmm ... I'm not crazy about her face paint. She looks respectable. Lovely coloring, but just not enough vigor to her face.

Kate Spade Barbie ... now we are talking ATTITUDE. I know little about Ms. Spade except that she designs pocketbooks ... but I like her face screening best. So she's the one that I will keep.

If you had to decide from this group of three, is there any one you would single out? Or would you hold them all? Or not a one?

Photos to help you decide .... 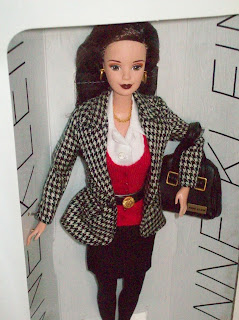 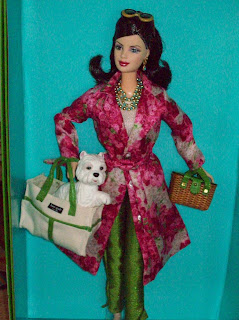 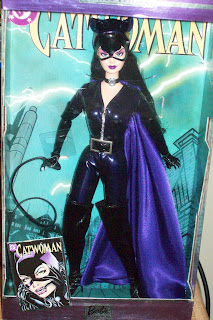 Fellow doll and action figure collector and one of my best online pals, Omar aka Actionman81, sent me a link about the release of a Katrina Kaif Barbie doll who will be released in India. I am adding a YouTube link that shows the doll with the actress. The doll looks as if she were made using the Drew face mold. Darn - I was hoping for a new face mold. (D'oh, what am I typing? New face mold. At this time?!?)
Anyone think that the Mattel doll resembles the actress? (Oh where was Spin Master at?!)

Thanks for sharing the link, Omar.
Posted by D7ana at 5:38 PM No comments: