Bewitched and Bewildered by Boxes, Part 2

The go-go-go pacing, the high-speed car chases, the boom and mushroom of explosions, balletic dances with bullets a la John Woo, whodunnit and maybe whydunnit sometimes conclude with the protagonist triumphant. Applause. Good plots are nice, but if the action clicks, we can suspend disbelief or laugh at the logic defying scenes. Action movies are fun. So when an action figure box captures some of that excitement, who can throw away that box? 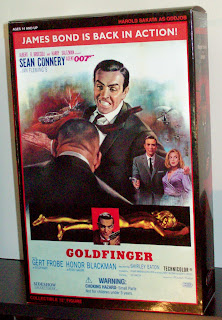 Behold - a Sideshow Collectibles box works its mojo: the box front incorporates art from the then-current movie posters. Relevant details such as the movie series and title, Goldfinger, and the actors are provided as well as the company name, and the size of the figure. Please note also that the box contains small parts NOT suitable for small children. Oh and to the right in modest red letters, we have the name of the character inside the box, Odd Job, and the actor playing that role, Harold Sakata. 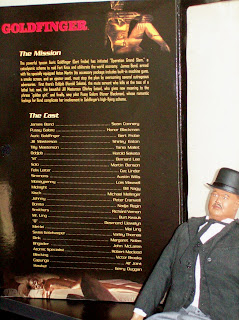 Next, we open the front flap to find the movie title, its plot, and the characters along with the actors playing those roles. And yes, that is Odd Job the action figure seated. [Note on the opposite side of the box there is a clear window that would show the action figure along with any accessories created for him. Since I opened the box and mislaid the inner liner, I will not photograph that side.] 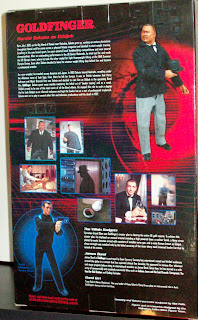 The box back gives us Mr. Sakata's biography, photos of both the action figure AND the actor, the villain gadget - his bowler hat - and more information about the James Bond series. 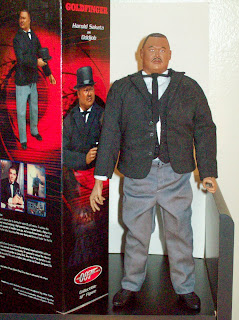 Last, a side view of the box and Odd Job again! So much information and so beautifully laid out. This box is a keeper for its pop culture value. At least until or unless I find Mr. Odd Job a better protective "home."

P.S. Odd Job is not full-figured as he looks clothed. Under his jacket and shirt, he wears a "fat suit". I will post photos of the figure and his clothes in another post.
Posted by D7ana at 8:01 PM 4 comments: