Reflections of "The Queen of Motown": Mego, Mattel, and Diana Ross

Diana Ross is a well-known American singer and actress. So it is not surprising that two major toy companies created likenesses of her. Mego created their 12 1/4" Diana Ross in 1977; Mattel produced their 11 1/2" version in 2004. I like both dolls: they both capture different aspects of the singer.

Both Diana Ross figures are dolls although Mego usually produced action figures. Back in the mid-seventies,  Mego had plans to have a doll series bigger than Barbie so they made their fashion dolls 12 1/4" tall. Okay, you can recover from laughing. Barbie before Bratz was a juggernaut. But Mego had the license and they produced their Diana Ross doll first.

Mego's face is larger and stronger than the Mattel face. Oddly, in spite of the hugeness of the doll - which bears no similarity to the physique of the singer-actress - I find her face looks more like the real person. Something about the half-mast eyes, the nose and the mouth shape, and the complexion. And what talons she has for nails. 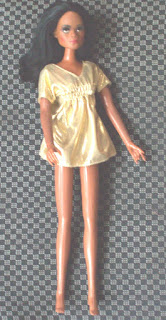 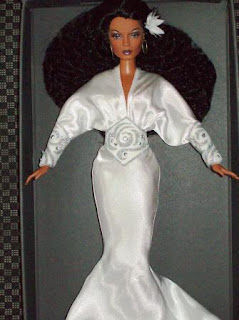 ... but her face doesn't capture the vividness of Mego's Diana 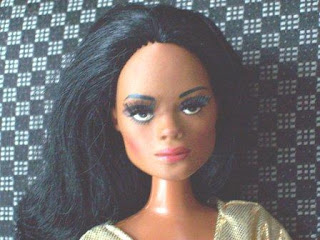 Here the two are side-by-side 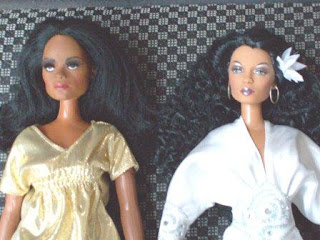 Which do you think - if either - best captures the likeness of Diva Diana Ross?

Wikipedia entry
Posted by D7ana at 5:55 AM 12 comments: Links to this post