What About This Figure?

I feel conflicted reporting this news, but it is about a playscale figure and it falls in with the Black History theme. The character though is someone I find distasteful so part of me wants to ignore it. Sigh. Drums fingers. Sigh again. Okay, I'll share.

Storm Collectibles has created a 1:6 scale Mike Tyson figure. Alter-Ego Comics and BigBadToyStore have the figure available for pre-order. What is the pre-order cost? $239.99 at both sites. Gulp. Yes, I typed $239.99.

You may remember that Storm Collectibles produced a stunning Dennis Rodman. The Tyson figure looks as well-crafted as the Rodman one. Were I wealthier than I am now, I would consider these figures quasi-art pieces. I wave aside the cost though and ask, why him? Can people really forget what he did?

Here are the answers to the Valentine's Day quiz:

[No]Angelus and T.J. send a late but sincere wish that you all had a happy Valentine's Day!

They are sharing a Valentine's quiz of playscale couples for you to match - Love Dove 1 to Love Dove 2. Sure, everyone will likely connect 2. Barbie to bb. Ken, but what about the other 49 couples? [No]Angelus and T.J. will share the key to the correct pairings early next week. 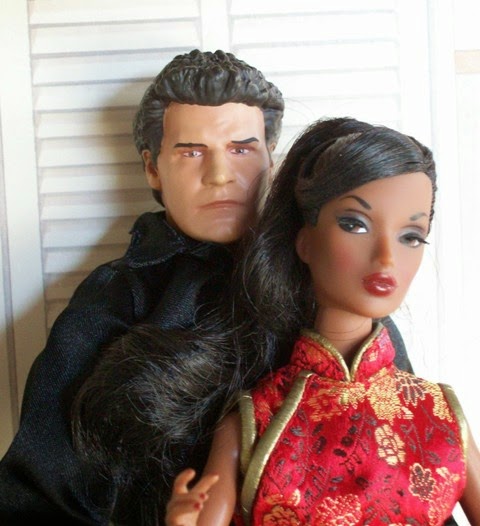 Once, this doll was in the "To Go" pile. Then I noticed her butterfly earrings and thought: oh, no, those are just precious. I cannot sell them. (Me who has not worn jewelry since the 1980s.) Then I noticed the equally pretty butterfly hair ornament and that the doll's face was well-drawn. No oversized, watery eyes like some of the 1990s dolls. Oh, heck, she's staying. And so the "To Go" pile loses a box. Shrug. Better now than later.


Anyway, since she is staying and mirabile dictu, relevant to a theme for this month, I thought I would share a few photos of her here. Unfortunately, I have not yet been able to get her butterfly earrings just so. The February theme she represents? Why the Chinese New Year! 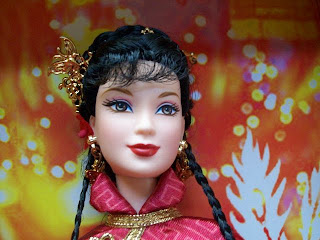 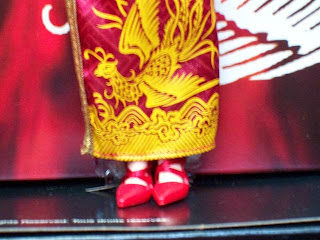 She's a little early, yes. But I needed a bit of brightness and luck today.

Multiple viruses have attacked my home computer. I will return when I can use it safely.

Below is a peep of my SECOND bag of stuff to go. 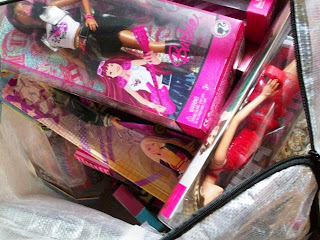 I want 2015 to be a banner year for PhillyCollector and my collecting life. In addition to getting organized, I want to write posts I considered but never made time to complete. Behold, the first draft of my list of Mattel playscale Black fashion dolls. Yes, I am going there finally.

This list is a "'work in progress." I realize that while I have written heritage month doll and action figure lists, I have NOT done any such lists for Black dolls. At first, I didn't think there was a need for this list because surely Mattel produced enough Black dolls for any interested person to find one or more. I would be counting forever. Was that true?

I started with Black Mattel dolls I owned. Then, I got some online help from a Wikipedia article, but I've added some figures not listed there. Lastly, I separated my list into four categories:

Why these categories? Shrug. The groupings make sense to me. I consider "Colored" Francie as separate and distinct from all other Mattel Black dolls. She is Mattel's first Black fashion doll.* "Colored" is a historically legitimate adjective: yes, it is no longer popular. But that is how the doll was named during her production run. Then we have Black Barbie and her Black family and friends. Response to Black Barbie is almost 180 degree different to that of "Colored" Francie. Then there are Barbie's Black friends - the default Barbie's Black friends. Hmmm ... and we cannot forget Barbie-scale Black celebrities ....

Anyway, here is the list I offer. Please let me know if I have missed any dolls and which. I thank you in advance for joining me in this research. I need to check all dates, too.

The first Black doll in the Barbie line

These dolls have no other racial identity.

Belinda (Barbie and The Sensations band) 1988

** These dolls belong under the Black Barbie category, but since the face sculpts and/or face screenings were meant to represent specific actresses, I re-assigned them to the Black Celebrity category.

Thanks for looking. Hope you recognize some of these ... and maybe can add to this list.
Posted by D7ana at 6:45 PM 18 comments:

Here are the tasks I set for the front room:

Open cardboard boxes with doll magazines - what stays? What goes?


Most of these dolls were keepers, but I'm happy that I have one IKEA bag of stuff to go. Want a peek in this bag to see dolls and a playset that are going? Here they are:

Do need to keep my spreadsheets updated. I have lapsed a little here. Why is this important? So I know what I have, what's no longer here.


Thanks for your encouragement and support.

P.S. I have no affiliation with IKEA. I mention the bag for identification only.