I have added a few more photos to the Integrity Playline folder I have at Webshots. Please see at this link: 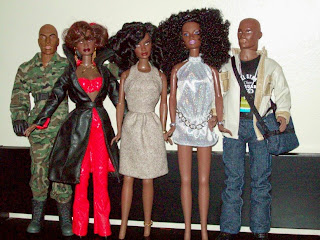 Left to right: Pierre Janay and his siblings - Netta, Phaedra and Madea (twins), and Tariq

The Janays are a prominent East Philadelphian family. Pierre Janay, oldest of the Janays, recently returned from a covert military assignment. He has many daughters - you can't throw a stone in East Philly without hitting one of his offspring. Netta Janay has one daughter, Mikkay, and owns Netta's Den, a gentleman's club. Fay Janay owns and runs the local voodoo shop. Dea Janay, mother of toddler twins Rashid and Latifa, has recently returned to singing at Netta's Den. Tariq Janay is the favorite fashion photographer in the city.

Who's who in the doll and action figure world? All Janays and Tariq are Integrity Toys products; Pierre is by M&C Toys.

Tariq Janay is the Fashion Insider Award Nite Tariq
Posted by D7ana at 9:11 PM No comments: