If you follow Disney movies, you might be aware of a recent movie called Teen Beach Movie. Teenagers Brady and Mckenzie find themselves in classic teen movie West Side Story. They have to "escape" from the classic movie. Singing and dancing and romantic musical chairs ensue.  These three dolls are based on characters from that movie: Brady, Lela, and Mckenzie. 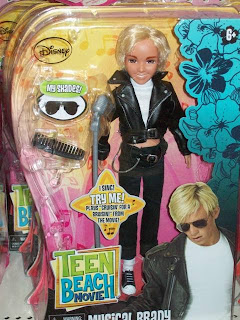 Musical Brady - the boy. I mention "the boy" because well, I wouldn't have guessed that just looking at his doll face sculpt. I am a little suspicious about his body too. I do have androgynous dolls (see my Takara guys) so I don't mean to sound catty. But this doll does not resemble the actor and does not look boy-like to me. Shrug. 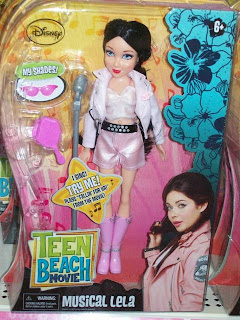 Musical Lela. Okay, the huge big head and the big eyes are creepy. But I do recognize the doll as a representation of the actress. (If only by the coloring and the face screening.) The other dolls in this series fall short on doll-actor likeness. 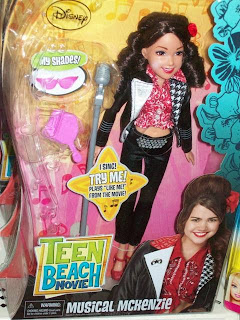 Musical Mckenzie. If Lela's head is creepy, Mckenzie's cheeks look like you could bounce a quarter off them. But I like the red bandana print cropped top. For another teen doll perhaps ...

Big, big heads they have. How big? I pulled up a beach Barbie to see how the bodies would look next to a Barbie. Here we have Brady and Mckenzie next to a basic swimsuit Barbie. 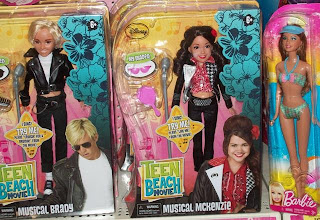 Hmmm ... aside from a slight bow-legged stance, the bodies are not bad. Width and height-wise, they could work in a Barbie-scale universe. Sad they do not seem poseable, but if you needed straight-armed or straight-legged playscale dolls (for store mannequins?), well, they would do. The big heads though would have to roll go.

The jackets look cute and maybe the tops could be used as well for other fashion dolls or action figures. I look forward to when these hit clearance. I don't see anything particularly exciting about them to rush for them now. No, this set calls for a Muff-like wait for clearance attitude ;-)