Blast from My Past or East Coast Borrowing Friday Flashback Theme

This post arrives with a nod to Smidge House, author of the ever-fascinating Friday Flashback posts. Instead of reminiscing, I've found old diary entries about dolls. Typed them and leave them here as Blasts from My Past.

If you had asked me before I found an old diary, if I were conscious of the Jem dolls back in the 1980s, I would have said, just a little bit. In my early work days, I spent more time doing social things that – alas – took money away from collecting. However, after reading one entry, I realized that I’ve been “blogging” about dolls a lot longer than I thought. That thought brought a smile to my face. Here's one bit about Hasbro's Jem.


Saturday, May 16, 1987
Kiddie City has the new Jem dolls. Rock’n Curler Jem (ugh!), Gold’n Glitter Jem (if not for the gold threads in her hair, the best looking one) and another one with pink/blonde hair that I’ve forgotten the title of. Then they’ve added new characters: Clash of the Misfits, Video, Danse, and Raya of the Holograms (the first plays the Holograms video tapes, the second plans their chorography [sic] – I like her best – and the third actually backs up the Holograms on the drums.
Alarm went off. It’s 6:41.
Back to the new dolls. Gold’n Glitter Rio is mmm-good-looking. I saw Kimber and Aja (I have the latter – need Jem, Kimber and Shana) but not Shana I’ve never seen her there. I don’t know whether I should ask or if I should check back at Kay-Bee Toys – they had her.” 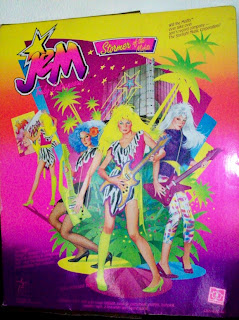