I confess, I watch it Sunday evenings, but I don't web crawl for updates about it. I enjoy it although it is not, say, Dr. Who. (Nor is it the best organized program I have ever seen.) It does have some elements I like: British accents, countryside views, period dress, and my Beau.

Excuse me? D7ana is dating an actor from Downton Abbey?

One of the Downton Abbey characters, William the footman, looks like my Handsome Beau doll bought from Standard Doll Company sometime in the late 1970s or the early 1980s. Here are two photos of Beau: 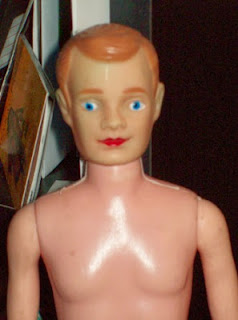 "Handsome Beau" stands 11.5" tall. On the back of his head below his hair, are two embossed lines: the top reads "19©G3", the second line reads "GRANT PLASTICS." He has no other marks on his body.

Well, Downton Abbey will be on soon so I'm going to finish this post now with this question: do you watch any series that you recreate in your play scale world?
Posted by D7ana at 9:05 PM 12 comments: Links to this post