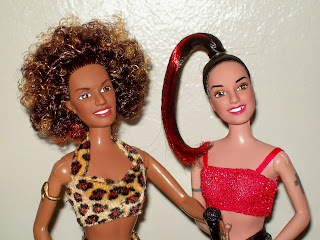 What I know (guess?) about the Spice Girls rock group could be written on the palm of my hand. With space left over. I can't say that I disliked them ... more that they became prominent after I stopped keeping up with singers and musicians and related groups. My post high school years.

Okay, the Spice Girls were British. There were five of them originally. Then the red-haired one left. The black singer was called "Scary Spice" and the blonde singer was "Baby Spice." Scary? Huh? I thought that British Black people were not subject to the same stereotypes as American Black people. Then again, "spook" might not have the same connotation in Britain. Shrug. And Baby? Surely she's close to legal age ... ? And no, I don't recall any of their songs - that I recognize as their songs. "Maniac Monday" was by the Bangles, right?

So why do I have any Spice Girls in my collection? La difference! Well, Scary aka Mel B, has a neat profile and corkscrew curly hair. Sporty aka Mel C, has a left nose stud and a gold tooth. How many young female dolls have a visible gold tooth? Rest my case there. Plus both dolls were on sale when I bought them.

Since I am short on Spice Girls and Spice Girls doll information, I am including two links on the group and the dolls:

Additional photos of my Spice Girls dolls are available here,