Query About Other Halloween Photos by The Mad Deboxer


Here are the photos. 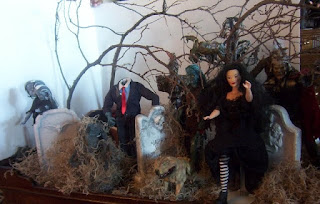 Night Creatures in a Graveyard
(This is the unaltered view behind the entry photo "The Cat's View.") A foggy dark night in a graveyard. A two-headed, gray-faced crone, a headless man in a business suit, a gnarling dog, and a girl - vampire? - wander among the tombstones and a few skeletal trees. Brrrr ...did I lock that window? 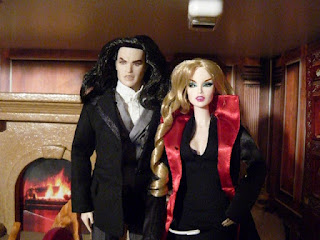 Dracula and a Bride
Integrity Toy's brunette Dracula fashion doll and his blonde bride stand in a warm brown-toned room with a blazing fireplace behind them. Who's to say, vampires don't want a little warmth in their rooms? 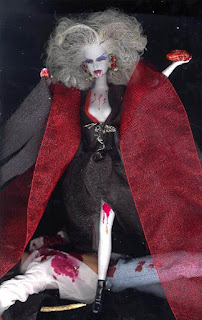 Frenzied Female Vampire
Okay, I do not recognize the doll who became this female vampire, but with her chalky complexion and wild, teased gray-white-black hair, she dominates this photo. Those reddened eyes, bloody teeth, and blood splattered body are alarming. Scary. Tell her she looks great in her flashy, form-fitting black v-neck gown with a burgundy red stole. Because she does have a bloody heart in her left hand while brandishing a knife in her right hand as she straddles some white shirted victim.

Don't you feel better for having seen these three photos? Maybe not at night? Oh well ... I did mention that they are Halloween photos. Shrug. Wink.

Those are the original photos The Mad Deboxer submitted. Stunning, yes? Okay, I state the obvious. However, they did not have a glaring window sooo ... yes, I asked for a photo with a border to represent a window. (Squeezes eyes shut and raises arm to ward off rain of rotten fruit.) However, the photographer gave something better - a multi-paned window with a cat as seen in the previous post. What photo is not improved by the addition of a cat and a black cat at that? Ummm ... rhetorical question that was. Okay, okay, the original photo is great. Could I be a total meanie and deprive you of it? No.

Me, I could interpret these as the window is implied ... they are window on a life - or death - scene. But I thought, someone will cry "Foul, no window." And they will send me a photo of Tinkerbell hugging a Care Bear. (Shudder. No Care Bears please.) So I await your decision.

If 10 viewers vote "save," I will allow photos that show either a vampire OR a window in a Halloween setting. My preference would be for both, but I can accept a broader range. In your comment, leave a vote to "save" if you are okay with a broader interpretation of the contest guidelines.
Posted by D7ana at 12:00 AM 11 comments: Links to this post