Hi All! My Clear modem is no longer working. Aaaaaacckkkk! If I get a new one, it will only work until November 6, 2015. So I am looking for a new service. Any suggestions for Philadelphia providers? I am considering NetZero. Anyone here use that service?

I've been unable to post photos on Google from the public Library.

Update: I could not post photos using Internet Explorer. When I used Google Chrome, I could upload the photos. So I'll use Chrome as my browser when submitting Blogger posts or using other Google products. Thanks, FLP staff, for this suggestion.
Posted by D7ana at 5:12 PM 12 comments: Links to this post 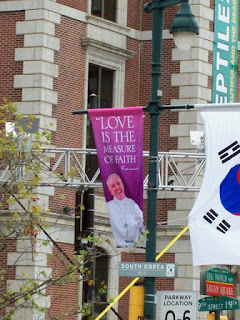 The last two days of the 2015 World Meeting of Families event brings Pope Francis to Philadelphia. The last papal visitor to Philadelphia was Pope John Paul II back in 1979. I don't have memories of that visit - I was in my teens and in my own "world." I am older now and more conscious of social/religious events. It's lovely and flattering to host the Pope. On the other hand, it feels as though the city has been overtaken. However, it is only for a single weekend, these preparations. Sigh.

The current visit makes me think about the Catholic-themed dolls and action figure available in playscale. I have a Lady's Mission nun action figure, a Takara Jenny nun dress, and one action figure I intend to become a priest. The potential Father awaits proper garb - like my Baptist minister, Isaiah Ezekiel Hadley. (Perhaps I will make them or buy them someday.)

Below, I list a doll and fashions produced that are NOT part of my collection

1967-70 Hasbro Flying Nun Doll‎ based on the character Sister Betrille played by Sally Field on The Flying Nun television show. This doll is 12" tall.

Aside: this is an interesting article about an action figure's representation..

Do you collect religious figures in playscale?
Posted by D7ana at 4:37 PM 15 comments: Links to this post

Seen at Target - Halloween Chelsea and Others

I stopped in a Target the other day. Three Halloween Chelseas, 4 of the five Fifth Harmony dolls, and some other dolls were out.


These are the 2015 Halloween Chelseas. Remember, they are only available at Target (and on the secondary markets). What I find interesting is that the suntanned Chelsea is a ghost while the palest Chelsea is a pumpkin. I would have thought that the palest doll would be the ghost. Then again the white satiny dress contrasts nicely against a tanned complexion, and the orange brightens the paler complexion. Junior-fashionistas-in-the-making!

Were I in the mood for buying now, I would buy the Pumpkin and the Ghost Chelseas. Oh heck, the redhead is cute, too. I love all their coloring. Wonder if they have any Black Halloween Chelseas? I remember Mattel did for Kelly, but I'm not sure about Chelsea. Is the black-haired Chelsea Asian? Hmmm ....


Next, I saw Barbie and her other two sisters appear in a Great Puppy Adventure gift set. I would like Skipper's dress - sunflowers on a dark background, but I don't like how the edges are finished. 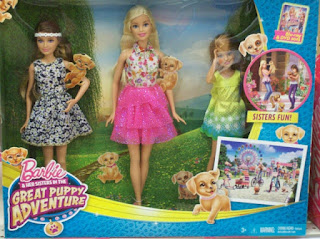 ﻿
I almost like this single Skipper doll's outfit - a dark tee shirt and denim jeans. If the pants didn't have the rips. I like fringe, but rips look sloppy to me. This Skipper has lilac eyes. Pass.

Rock n Royals band member. She's very pale like the Pumpkin Chelsea. Blue streaked hair with one side cut shorter. The short hair cut differs from the overflowing tresses most fashion dolls wear. Hmmm ... Rachelle face mold? The doll I saw has an odd look to her vinyl/plastic that reminds me of cheaper dolls. A waxy look.

I saw most of the Fifth Harmony dolls. Yay! Now I've decided, I just want Ally from this set. Why? The others look too much like other dolls I either have or have seen. Unless I come across a doll with vastly different face screening, I can pass. Good for my wallet, yes? Yes!

Same doll aisle, different manufacturer: a new Disney line, Descendants, rendered by Hasbro. The Descendants are the children of Disney heroes and villains. There are four female characters and two male: Mal, Evie, Jane, Lonnie, Ben, and Carlos. I like the articulated bodies, but I'd have to sell the big heads. 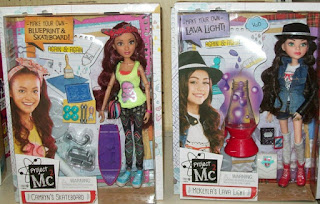 Walmart has the 12" Anna and Kristoff figures dressed for the Troll Wedding scene available. The price is $39.97 in stores or online - before taxes and shipping, of course. Please note, this Kristoff seems to have molded clothes and NOT the cloth, removable clothes of the Kristoff available at the Disney Store. The set includes Anna, Kristoff, Olaf the Snowman, and two trolls.


If you want these figures, check them now before the Christmas shopping rush.

Today is International Chocolate Day. I hope everyone has had the chocolate of his or her choice. Below is a list of 14 dolls and/or action figures that refer to chocolate. Can you think of playscale ones I missed? Share in a comment if you can.

Chocolate Bon Bon was the name for the darker brunette color of Twist'n Turn Barbie for 1967-68.

Oreo Barbie and Oreo Fun Barbie - the one time Mattel should NOT have made a Black version.

I know I should have added See's Candies Barbie ...
Posted by D7ana at 11:59 PM 9 comments: Links to this post

Tagged for the Liebster Award - So I'm Tagging Back!

Billa nominated me for the Liebster Award. (Lisa did, too. I'll be back, ha ha!)


Rules and procedures. Thank the person who nominated you and link to their blog. Thanks, Billa! Give your readers eleven random facts about yourself.

1. I studied karate for two years. 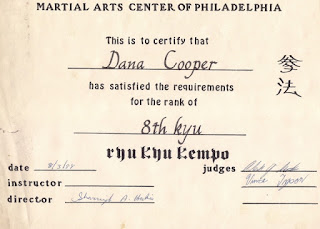 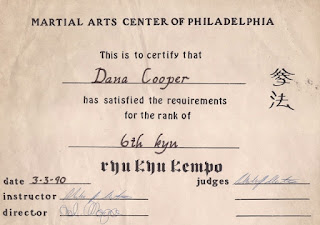 2. I've tutored English to adult speakers of other languages - a little over two years.


4. I find stationary stores almost as much fun as toy stores and bookstores. All that clean paper and those sharp new pens ...


5. I seldom wear jewelry, but sometimes I don this bracelet Brini sent with the doll sweaters. Its smooth silver twist and sea-blue sparkles please me. Pretty bling! Thanks again, Brini! 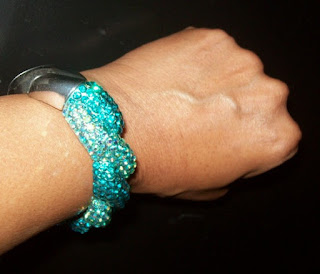 6. America's Next Top Model is a guilty pleasure. I have never wanted to be a model. I don't particularly care for the fashions shown. I don't know why I watch it. I dislike most reality shows.


7. I prefer to buy my own chocolate.


8. I like sandals in summer and boots or sneakers for fall and winter. Heels? Never!


9. Strawberries, plums, and pink grapefruit are my 3 favorite fruits.


11. I LOVE the Internet, the World Wide Web, and using computers.


Answer the 11 questions from the person who nominated you.


1. Have you got a secret dream or a wild project?
I'd like to experience a Doctor Who/Andre Norton adventure where I save people.


2. When has a project exceeded your wildest expectations? How?
This blog. I have readers and it gets comment - wow.


3. Chocolate: white, dark, milk, or none at all?
Lots of dark chocolate. Little bit of milk for variety. Smidgen of white. I like to be fair ;-)


4.  If you could have dinner with three fictional characters, who would they be?
David Tennant's Doctor Who
Barbara Hambly's Rose Vitrac January
Michael Paul Chan's Detective Lieutenant Michael Tao


5.  What's your all-time favorite movie?
It used to be The Wizard of Oz. I'm not sure now that I still have one. Possibly Serenity ...


6.   If you could choose a career other than your actual one(s), what would it be?
Doll designer

7.  What time period would you most like to live in, other than the modern one?
I like the time I'm  in now. But I'd try out the future. How about a year from now?

8.  What is the most versatile tool in your arsenal?
My brain ;-)


10. What do you most wish you could organize properly?
My doll collection ;-)

11. What do you do to find inspiration?
Searching online.

4. Confessions of a Dolly Lover

Invent 11 questions for your nominees.


1. How did you become a blogger?
2. What was your favorite subject in school and why?
3. You can be any doll you want, brought to life. Which doll are you and why?
4. What is the coolest story ever connected to your blog?
6. What do you do when you are not blogging?
7. What are your Grail dolls/action figures?
8. What three countries or cities would you like to visit?
9. Is there a project you dream of accomplishing?
10. What are your favorite foods?
11. Any tips you would give future bloggers?
Posted by D7ana at 10:01 PM 15 comments: Links to this post

Yay, September is here! Happy Labor Day to those celebrating it.

Summer is winding down. Temperature is in the 80s. Most days are sunny. Here we have Integrity Toys' "Wild" from the Monsieur Z Summer Babes wave stretched on a bench.

Back to School dolls, action figures, and playsets

Doll and Action Figure Sale - I'm at a now or never point.

The Liebstar Award, moving, and organizing are other topics I intend to cover. What's coming up for your blogs?