Michael Jackson Next to Barbie Basics in Kmart

Okay, Playmates has a new Michael Jackson Thriller doll - well, he's in the doll section, but really, he's more of a figurine. Yes, figurine, NOT figure. Figures are poseable and kin to dolls. Figurines belong with sculpture. My reasoning is if the figure has clothes molded on AND the body is set in an odd pose, it's a figurine. Not a doll. Not even an action figure. But some people use "doll" for sculpted human figures of any sort. Sigh.

So I thought, what if other collectors read about a Playmates/International MJ doll and think, Barbie beau. Well, as you can see, he's 10" and NOT 12" so he's dwarfed by the taller Barbies. Not that Barbie and friends can't date shorter guys. Then he's in a dance pose that won't have much range in non-video stories. At least, if a guy with that leer and that stance - approached me, well, cowardly me, I would run. Maybe shriek. Help. Or position myself in a defense pose.

That isn't criticism of the figure which I confess, I didn't stare at long enough to form a collector's opinion. More about the placement of the item. (What's a figurine doing in the doll section?) 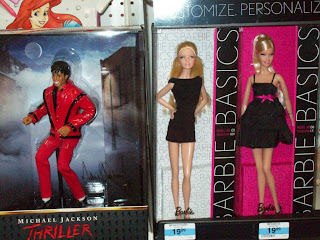 There will be additional Michael Jackson figurines though. The Billie Jean one has a more doll/action figure stance. So Michael sculpture fans can have another choice.
Posted by D7ana at 7:03 PM 5 comments: