My Three Toms or the Cosmic Tom in Vinyl - Link Added 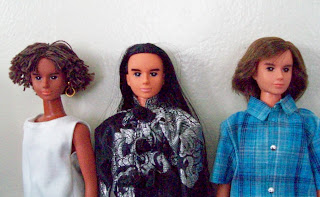 Will the REAL Tom, please stand?

Please note, all three young men remain standing. They are all TOM.

From left to right, we have the Original Tom from 1992. He is the first Tom. In the middle, we have Totoco - Chinese Tom also from 1992. At the end, on our right, we have Licca Club 67 Tom again from 1992. One character, three different complexions. How can this be?

1992. Takara issued a new, handsome boyfriend for Jenny, and they named him Tom. Tom is from Los Angeles. He break dances and gets into trouble. On the back of his box, he is shown pushing Jeff, Jenny's "Ken," back. Ooohh Tom the Bad Boy. Eh, but he's cute and how many Black males would I find produced in Takara's Jenny line. So I bought the original Tom.

Then I found out about Chinese Tom from a Japanese store called Totoco. Oh, how did that happen now? In the United States, we don't "change" races. Sure, Barbies are sold in various complexions and various races. But ... well, everyone KNOWS that ethnic Barbies are for marketing purposes. Sell Black Barbies to the African American market. Sell Latina Barbies to the Latino market. During the occasional "Blue Moon," Asian Barbies are produced. For whom? Oh, yes, for the Asian market.

Tom differs though because he is Tom for the same market - Asian children who play with dolls and possibly for collectors. The "Black" Tom and the "White" Tom are NOT described as such. They are just Tom. How?

My understanding is that, his eye print defines him. You shall know Tom by his eye print. And if you look at the three Toms, look at their eyes, they are all the same. Different colors, but basically the same eyes.

I brought Tom or the Toms forth today because his/their race(s) seem(s) so ... fluid? They remind me of Zorah Neale Hurson's "I belong to no race nor time" from How It Feels to Be Colored Me. Perhaps he is a Cosmic Tom?

Note: the description I wrote about Tom is from memory from Barbie Bazaar and Doll Reader magazine articles and from messages in Yahoo Jenny Groups (Casual Jenny and Biscuit's Club). If anyone thinks that my description in the paragraph that starts "1992" borders on plagiarism, please send a comment or e-mail me so that I can alter the text.
Posted by D7ana at 10:44 PM 8 comments: