I don't know if this particular Barbie series is a Burlington Coat Factory exclusive or not, but that is where I saw them. The line seems to consist of Barbie, Summer, and Teresa: here are their thin cardboard boxes lined up with the side of one box that shows the [possibly] three dolls in the set: 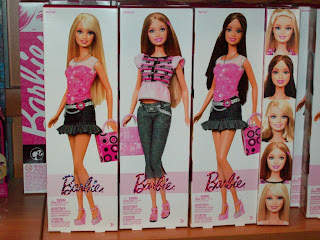 What I find interesting is that we have 3 blond Barbies (different hairstyles), one red-haired Summer, and one brunette Teresa. No Black or Asian dolls in this series -- shown on the box or among the dolls. I know, I know; there are the So in Style dolls. There are the Barbie Basics. So, there are Black dolls in other Barbie series. I suppose that there is one Asian doll in the Barbie Basics line. Not a single Asian doll shown here though. What happened to Lea? Lea come back! And is Grace Barbie's only Black friend? What happened to Christie and Nikki? Yes, I am greedy ;-D

Riiiiggghhhhhtttt.
Posted by D7ana at 11:51 AM 7 comments: Links to this post