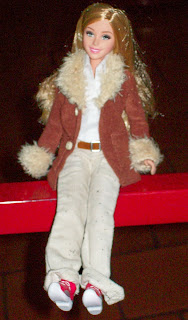 Note: Tiara is only available with Sharpay Evans in a double doll set.

Here is a variation on my usual answer that the doll or action figure is good looking. I mean the Tiara doll is pretty. But she made the Top Ten DAFs of 2009 List because she has one of the brightest smiles of all the dolls I have bought this year. I consider her my "Sunshine Girl."

Having collected Barbies and other fashion dolls and action figures, I have many teeth-exposed smiles/grins and many blonds. (That's why I become delighted when I find a like-able doll who is not blond. Sigh.) Not one of them though, seemed as effervescent and lit as Tiara. There is something in her smile that pulls her out of the ordinary.


Why is Tiara sixth on the Top Ten List?

Mostly, Tiara is at the sixth spot because five other dolls had a little something more to offer than she did. To a lesser degree, her arm positioning is stuck in welcome mode if lifted up or as coy-maidenly if set down. That quirky feature doesn't completely detract from her charm, but it keeps her in the bottom of the Top Ten DAFs List.

Tiara Gold can be found at Walmarts or at discount stores like Ross. I bought mine for about $7.00 at a Ross store. You might also find her elsewhere, but Walmarts and Ross were the last places I saw her. I've seen the Tiara-Sharpay set described as "rare" in a recent search, but I have seen several at Walmarts and at Ross.
Posted by D7ana at 9:43 PM 4 comments: Links to this post