In Toys R Us Today - Photos of New DAFs

Stopped by a Toys R Us just to see what they had. No intention or ability to buy. Fortunately, I had my dear pink camera. Snap! Snap!

Do you see what I see? 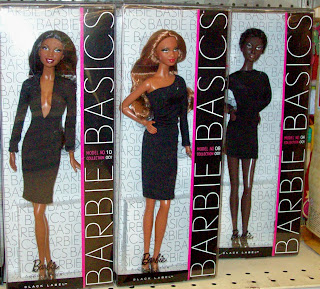 Wow. First time I have seen all three African American Barbie Basic dolls at the same time. And lucked out being able to photograph them. Whooo hooo!


Babysitter Barbie and Kelly ... in a Kelly-sized bathroom? 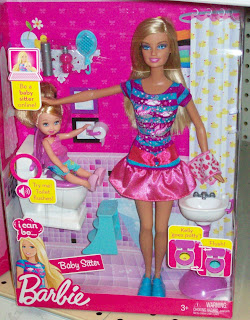 Okay, I only babysat my younger siblings, but is this the true scene for modern babysitters? A bathroom? I'd have thought a living room/parlour/family room with an overstuffed couch before a color television. Or babysitter curled up in a chair with a book. The kid could be sleeping on the babysitter's lap or better still, child asleep in her [own] bed. Or babysitter standing in front of an open and lit refrigerator, filled with edible goodies. Note: guess that means I wrote myself out of any babysitting jobs. Shrug. Eh well, I don't have the energy to fight off the requisite murderous villain stalking the babysitter. Sigh.


Playmates Star Trek McCoy and Sulu from the 2009 movie: 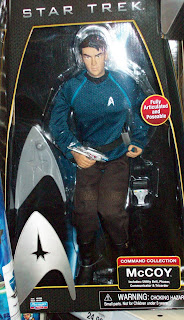 I got a better photograph of the John Cho Sulu. Remember, he's a Toys R Us exclusive. 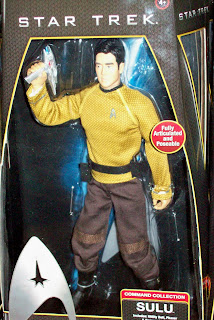 New from MGA Entertainment: More 2 Me Avery and Lexa. 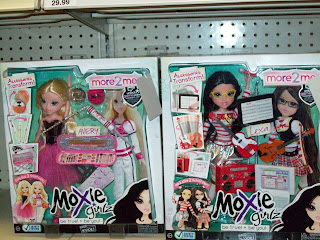 No Sophinas in store when I was there, but she is shown on the back of the box. No Sashas in this wave per the box back. I feel a little sad when I look at this line. MGA Entertainment used to have a Sasha with every Bratz wave. It almost seems as though Sasha has to pay for Mattel seizing the Bratz line. Eh, but that's not really it. It's the numbers. African Americans are no longer the largest minority in the United States.

I also saw a Fashionista Ken - yay! Love his Michael Jackson hat. Poseable Ken! Tears welled in my eyes. Oh Mattel, allowing Ken 100 poses, too! If I had a hat on, I would remove it. Breakdancing Ken. Will the oxymorons never cease? Will I ever get work again? Isn't it time I ended this post?
Posted by D7ana at 7:35 PM 9 comments: Links to this post

The World Peacekeepers E.O.D. Technician is cute. But although he is an older man - and not as well represented in the DAF world as might be expected, he misses falling into the Top 10 list because he is not that exciting.

Ballerina Barbie, SiS Kara, Nikki, and Sharpay are pretty dolls. But that's the most I can say about them. I like them in my collection, but nothing stands out about them. Kianna works the cute factor - who can bypass curly pigtails - but she looks like the other SiS little sisters. Graduation Day Ryan has the kilt working in his favor. Oh and the soft curled, rooted hair. Move past the hair and the kilt though and where's the draw? Yawn. Stretch.

I like the Cheetah Girls Dorinda ... she looks like a character more than some dolls who look doll, but she just misses the wow factor. Sigh. I like Benjamin Lauth, another character, but articulation-wise, he's on the stiff side. For an action figure. I like that he isn't as pretty/handsome as my Kens, but again, no wow factor.

So where am I now? Who are the remaining 10 by manufacturer?