Liv Fashions Worn by Other Dolls

Here are three photos showing Spinmaster's Liv fashions on dolls other than Liv. Most of us have Mattel fashion dolls so Nikki, friend of Teen Skipper, HSM Sharpay, and Flavas Kiyoni Brown model a few of the Liv jacket separates. The Liv sleeves are long for Teen Skippers and HSM Sharpay. Jointed at her elbows, Kiyoni might have been a better match for the black leather jacket or the orange-red jacket, but who could resist that bright turquoise jacket against Kiyoni's rich brown complexion? Not I. 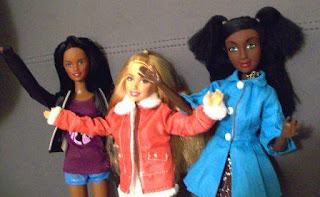 The next two dolls are less commonplace: Who's That Girl Kana and Takara's Mitsuki model Liv jackets, too. Again, the sleeves on the long-sleeved jackets are too long. I probably could have swapped these jackets - had Mitsuki wear the yellow-black herringbone jacket and Kana the gray-pink camo one, but the selected styles suited the dolls better. I'd rather the outfit "fit" the doll's character than that it fit the doll's body. Although it is best when both size and style fit. 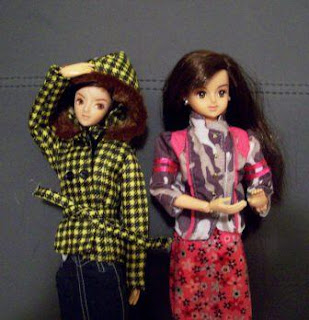 Me, I will overlook the over-sized hood. Kana tried to "work it" by stuffing her long hair in that cavity. Kana has a small head anyway. The hood is deep. I don't think that it ruins the outfit.

Here the five teen dolls pose for a group photo 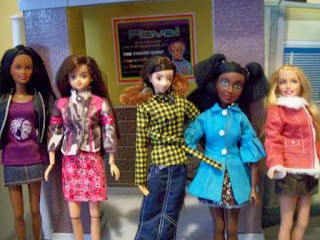 That will "wrap" this post ... but wait, Belinda has an offering. Belinda chose the Liv boy shirt for her photo. 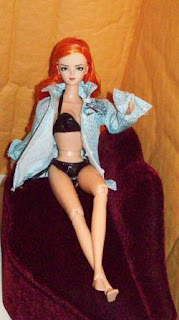 Belinda had to go there. Sigh.

I have some other Liv outfits that I will show on Momokos and other dolls in a future post. These four photos will allow you to see Liv fashions on other dolls. And you can see Liv fashion quality. How do these doll clothes compare with others? Well, these are playline fashions. Liv fashions use velcro and have unfinished hems. I would rate them as better than the current Barbie playline fashions, but no where near the exquisite tailoring in Integrity's Fashion Royalty clothing line. Spinmaster has their pulse on current fashions - as far as I can tell - I have seen the open-toe boot in trendy fashion stores in Philadelphia. These outfits are affordable, trendy, and now part of my doll wardrobe.
Posted by D7ana at 10:07 PM 5 comments: