Here is a 2003 KB Toys advertisement for one of the first waves of Mattel's Flavas dolls, "Street." (The other wave was called "Sport.") The ad also shows a purple Flavas van, one of the two Date dolls and bike sets, and 3 of the six denim jackets created for each doll in this line. Here is the full ad followed by photos of the pieces. 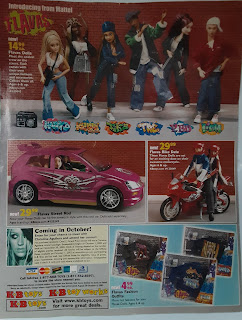 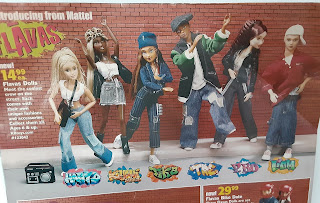 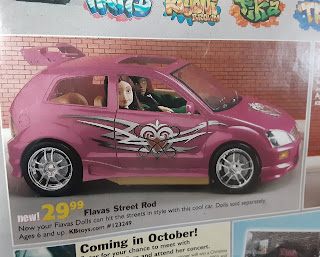 Flavas Bike Date - Liam and Happy D. Two dolls and one motorcycle were in this set. The other Bike Date set with Tre and Kiyoni Brown, not shown in this circular, had a purple motorcycle. Tre's and Kiyoni's jackets were yellow, black, and white color blocked. 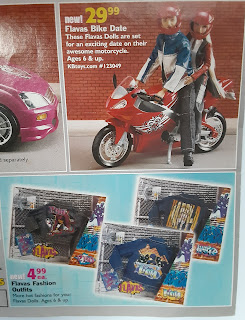 It's funny, I positively hated this line when it was out, and now that I'm older I quite like these dolls! They're very well-made. Ah, KB Toys...those were the days, weren't they?

Such older advertisements are so much fun to look at. :) The dolls are posed very lively in the ad! I had no idea that there was a car from this series, Mattel has made so much cars over the years, those alone would make a nice collection!

That advertisement is a trip down memory lane. That street rod is very nice, although the logo on the side seems familiar. The car's even got a spoiler! The dolls are very stylish(for the time!) but I don't see any that call to me now. It was an interesting way for Mattel to try to branch out of the Barbie mold (mixed metaphors!) :)

Hi Raging Moon1987, Linda, and Barb! Thanks for stopping by!

@Raging Moon1987 - I thought the line was funny. I mean Mattel's idea of "cool" amused me. These were well-made dolls and the accessories were top, too.

@Linda - I LOVE older advertisements, too. Yes, there was 1 car - van? - in this series. My Scene and regular Barbie lines had multiple cars. Maybe I'll do a fuller car/vehicle post? Thanks for the idea!

@Barb - I love seeing advertisements, especially older ones. I have to look up "spoiler" - I'm woefully ignorant about car parts for someone with doll cars, lol. I don't have this van nor did I ever. There were other waves of the Flavas dolls; I'll see if I can find photos of them.

I like when Mattel branches out to other doll lines, too. And I love mixing metaphors, too. We should enjoy language ;-)

Hi Dana,
Thank you to share with us these pictures. I didn't know this doll. See you soon.

Hi Shasarignis! You're welcome. I'm glad that you see the Flavas so you can decide if they are dolls you would like to have someday. You will be seeing your fashions here soon. Thanks for visiting and for commenting!