What I Got When I Went to Toys R Us Yesterday

Frannie and Vanessa, I guess you know me, lol. One of the dolls I got is the Sinatra Barbie doll; the other is Dolls of the World, Ken from Japan. Why? Well, first I was going to get the Rock Hudson set. I mean a good looking guy with a NOSE ... how could I resist? Hmmm .... $79.99 being too steep is how I resisted. The only other $79.99 set was Lucy and Desi. I would have bought them, but I'd only want Desi. And I don't like the way Mattel paints Desi's pupils to the far edge of his eye.

In my dream world, I would have bought the new Johnny Depp doll, but he was not among the available choices. (See how that Angelica choice, Vanessa, was a near miss?) Harley Davidson Ken was likewise, not available. And I had wanted the DOTW Ken anyway so I got him. He's getting out of his cartoony outfit as soon as I can decide what he should and can wear. Also DOTW Ken from Japan has these dreamy cheekbones. His features are different from other Kens.

Sinatra Barbie? Okay, I confess. The suit did it. Yes, I bought her for her black-white checked suit. And that gray plastic fedora hat. Sigh. Love the V-neck white shirt too.And the long black tie. I could work those pieces for my other dolls. And use that pale, poser body for one of my very fair dolls. Which one? You'll learn more in a future post.

For now, let's have the Buff Guy and the Gal-in-the-Suit. 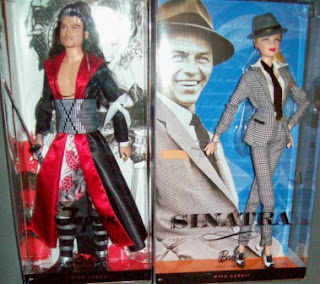 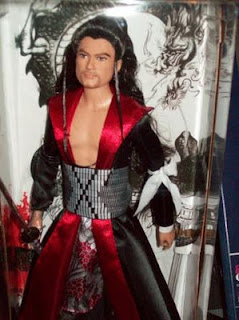 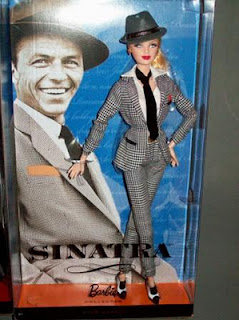