Should I Sell It? AH-6 Helicopter

It is easily the coolest 1:6 scale vehicle that I have. 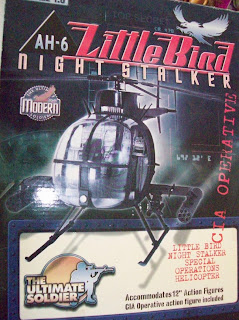 Sure it was created for modern soldiers ... The Ultimate Soldier, no less. Alas. Yes, the Ultimate Soldier line includes some of the hmmm ... homliest action figures ever created. But then again, these figures weren't meant to be glamorous. They are warriors and villains and characters not usually associated with usual doll-play. So that makes them potentially interesting to add to my collection ... well, maybe not the pilot in this set since I think some of my guys want to replace him.

Why? My guys and gals want this prop for thriller movie scenes. Scenes I will not likely do anytime soon. At least, I don't plan to do so. Yes, pretty sure about that. So maybe I should sell it. But then again, I would not want to buy it again.

That is why you see the wonderful graphics on the box, but not the actual helicopter. I have not yet opened the box. Yes, I do have stuff I want to open some day. No, I don't like to just look at the graphics printed on the boxes. I enjoy seeing and posing actual figures. But if I sell it, shouldn't I allow the new owner to have "first touch?"

And if I put it together, it will be a pain to put it back.

Then again, it would be cool to have around. It will likely be the closest to being near a helicopter I will get.

(Note: not saying I'm afraid - just saying I have no intention of ever boarding a helicopter or any other air dwelling vehicle. Nope. Not unless the earth is all on fire. Bump knuckles to SmidgeGirl.)
Posted by D7ana at 4:33 PM 7 comments: Links to this post