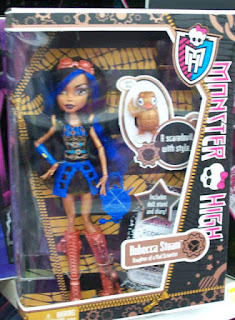 Mattel new Monster High character Robecca Steam is described as wearing Steampunk style. I had seen a "steampunk" Wonder Woman and seen references to Lewis Carroll's Alice books, but what does steampunk mean? What is Steampunk style?

I read the wikipedia entry on steampunk. My short version of "steampunk" is a mashup of Victorian-19th Century fashion, style, and thinking set in an alternate universe where steam is used instead of electricity. What does that mean for fashion? Select pieces recognizable as 19th century like corsets, pocket watches, monocles or goggles, waistcoats, petticoats, and full skirts.

Here is the back of Robecca's box. Do you think that her outfit looks steampunk? 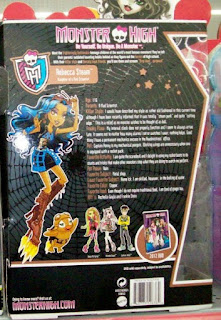 There doesn't seem to be a lot of material to her outfit and her companion, but what is there could be considered "steampunk" - bronze goggles, blue stopwatch bag, tall Victorian boots, companion mechanical owl.

For those of you planning on getting a Robecca doll, do you intend to maintain her steampunk fashion style? If you are interested in creating additional steampunk fashions for your Robecca Steam, you can visit these websites for tips:

I saw her today. She is really cute. I love her skin tone. I am picking and choosing certain MH dolls to buy. I have to stay focused. Lol!

I saw this in Walmart from a distance and thought, "OMG, they've made another black monster character!" I ran over there all excited and then I was like, "Oh. Hmm."

I was slighly disappointed and rather perplexed actually. The owl is steam punk and reminds me of Bubo the Owl as created by Ray Harryhausen (huge fan) for the original Clash of the Titans. Not at cute as Bubo though.

As for the doll, uhm. Her body, shoes and goggles give me steampunk, but her hair and outfit do not. She's an interesting mix of fashion and mechanics... but I cant say in a good way. She's almost too much, like there's so much going on that it's distracting. I wouldn't kick her out the toy box though.

@Vicky - Cute, yes. I love her bronze complexion, too.

Ah so you have the MH bug? They are tempting, but I have managed to hold my own against them. Have - not - yielded - yet ... although it is getting harder to say no, lol.

@Muff - OMG, I remember the original Clash of the Titans, Sinbad, etc.! I used to LOVE them. I have to add RH's stuff to my Pinterest account.

Maybe Robecca's a bit "kitchen sink" style - Mattel dumped steampunk markers all over her. Like they had a checklist that they cleared

Thanks for the feedback on Robecca and steampunk!

Robecca is really cute - like Georgia I think her skin tone is great and really makes her stand out from many of the other dolls. Having said that Robecca doesn't seem to be as liked as some of the other dolls, particularly when compared with Venus who everyone seems to love!

Hi Charlotte! Thanks for the link showing the MH dolls. If I were allowed any and all MH dolls that I liked, I would have Robecca, Scarah Screams (love her hair), Howleen and Clawdeen, the Dead Tired bunk bed set, Toralei Stripe, and Spectra Vondergeist Dot Dead Gorgeous. Oh, my - that visit to your website was not a good thing for me - now I have a MH Wish List.

Given the price of the Scarah though, I doubt that she will ever be in my collection ;-{