LGBT Dolls and Action Figures: a Partial List and Links 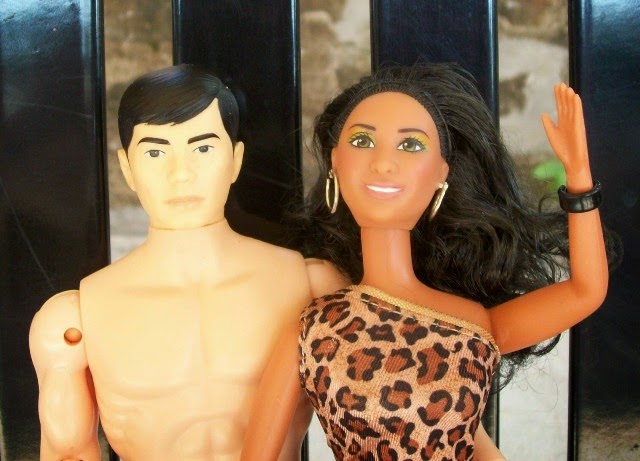 I do not collect gay dolls as a theme. Some of the male figures are enhanced to such an extent that I either blush or laugh to see them. They make me think of the phrase "the tail wagging the dog." So why submit a post about lesbian, gay, bisexual, and transgendered dolls? To see what I could find out. Flex my research skills. And to recognize that diversity means difference beyond race or ethnicity.

So I include this list of dolls either based on LGBT people or created to represent LGBT people -- with two exceptions*. Those two people expressed public support for the LGBT community. If you are aware of other playscale figures whom I have missed, do send the manufacturer and the doll/action figure name in the comments.

[Jackie Chan listed here because he is sympathetic to the LGBT community. Hence the brackets. I thank two readers for asking about Jackie Chan; I apologize for my earlier error in listing him here. He is married to a woman, and he has not come out as gay.]*

Boy George - additional information about this doll is available only the listed photos are mostly gone.

Willow Rosenberg from Buffy the Vampire Slayer (character only, NOT actress playing role)

Elton John- more information about the playscale version of the singer

You missed Raven Simone. She recently came out as being a lesbian.

Yeah, what Phyllis said. But wait, what? Jackie Chan is gay?!

I have the same reaction/response about Jackie Chan.

Thanks, Phyllis, for mentioning Raven Simone. I had not realized that she had come out officially.

@Muff and BDE - I had heard rumors that he was, but I see now that he has not officially stated that he is gay. So I need to correct my statement and to issue an apology. And hope that I don't get sued over my error.

I never would have thought about this population in dolly world. I suppose everyone is included!

Hi The grandmommy! Yes, there's a doll for almost everybody ;-)

I’m not opposed to gay dolls (geez, that sounds weird, like plastic and vinyl can really go at it) - everybody, gay or straight, should have a dolly, imho. IT has done a particularly good job satisfying gay collectors with les homme (that didn’t come out right, did it?). Les homme is gorgeous, albeit a challenge in my mostly heterosexual doll world because if IT hasn’t already done a story card indicating a particular homme is gay or bi, the fact that toilettage de l'homme is impeccable sets off gaydar making IT doll couplings a challenge for me. Not complaining though. It is what it is and everyone gets to enjoy a dolly (did that come out right?)

Hi Roville! Yes, representation for all is good. I got that from your comments ;-D. The funny thing about my visitor informing me that Jordan was gay, I did wonder if she had seen him doing something, lol. Did she catch him touching one of the guy dolls? Should I be jealous that she saw my dolls in action when I had not in all my years with them?

In spite of my affection for Integrity Toys as well as other toy manufacturers, I often disregard their storylines. LOL. Okay, I usually toss their storylines aside. My dolly, my world. My Lukas, for example, is straight. I cannot afford the IT fashions for him so he has to make do with Kenwear and/or action figure fashions. Plus, the IT fashions are a little more demanding than I like - lace up shoes.

Don't forget Sideshow's Willow Rosenberg from Buffy the Vampire Slayer. Also Irwin and (I think) Bandai created dolls for Sailors Uranus & Neptune from Sailor Moon.
Harley Quinn & Poison Ivy have been confirmed to be bi in a recent DC storyline - so that's 2 more from Mattel. And Tonner has Cpt Jack Harkness from Torchwood.

Hi and thanks, Veronica!

Darn it! I actually have the Sideshow Willow. And I used to watch Buffy so how could I forget her? Thanks for that reminder.

I recognize the Sailor Moon name, but not the series. Still, I'll add Sailors Uranus and Neptune to the list.

I'm not current on my DC storylines; thanks for the tips to add Harley Quinn and Poison Ivy.

I pass on Tonner's Captain Jack from Torchwood because he's bigger than playscale. I suppose that Tom of Finland's Rebel figure and the Billy trio barely fit playscale category being 13" and somewhat ... husky, but I think they can just make it. But oh, yes, that now-then-future flirt Captain Jack would definitely make any LGBT list.

I would like to suggest Isul, from Groove Inc. He is part of the Pullip doll line. While there is nothing specifically gay about him, there are several releases of him wearing dresses and lolita fashion. Maybe he would be considered gender queer, or gender variant?
Here's an example:
http://www.amiami.com/top/detail/detail?gcode=FIG-DOL-5110

Thanks for suggesting Isul, Pullip's younger brother. I see what you mean about him wearing lolita fashion. I am not sure that I would include him because his head - like that of the others in the Pullip doll line - is so very large. While they can wear Barbie clothes and vice-versa, I am not fully comfortable with them in the same scenes.

But yes, I would - by theme - consider him as akin to LGBT even if he does not fit precisely into those specific categories.

I should have enlisted some help from another blogger, possibly MZ of Blog of Eternal Stench. Then again, questions will arise after writing ;-)

It's funny, but I actually just had a conversation with a co-worker a couple of weeks ago about creating a similar list for action figures. I think that list turned out to be a little longer than the one for these Playscale dolls, although maybe not by much!

Hi jSarie! Thanks, glad you enjoyed seeing the list. A similar list for action figures would definitely be longer - especially if you removed the playscale limitation. I'd be interested in seeing that list: I'll check your blog for updates.

Heh, we eventually got bogged down in arguing over whether you can count video game characters who are player-determined (or were characterized differently in different translations), and figures based on cartoon versions of comic book characters. But probably still worth compiling none-the-less!

Hi jSarie! I would draw a blank on video game characters, lol. The only ones I can think of are Mario and Lara Croft of Tomb Raider. Facepalm. My dirty little secret: I barely played video games. I've heard of them, but other than that - blank, lol.

If you compiled a list for a post, I would enjoy reading it. Be good to expand my education ;-)